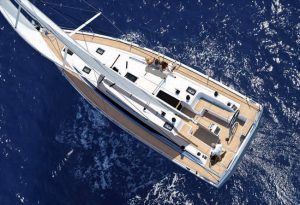 It’s not only the management that’s changed at Bavaria Yachts. Race yacht designers Maurizio Cossutti and Alessandro Ganz are moving the boats steadily towards the speedier end of the performance spectrum

It’s Bavaria Yachts’ big comeback boat in more ways than one. Launched at the recent Düsseldorf Boat Show, the Bavaria C42 is the first new sailing yacht brought to market under the shipyard’s new management, following a change of ownership. Not only that, but it signals a significant shift in Bavaria’s yacht building strategy: a definite and deliberate move away from the rather sedate family cruisers of the previous generation, which were aimed primarily at novice sailors, towards a new and more broadly appealing range of boats.

They’ll still be spacious, high-volume cruisers designed for easy handling but the Bavaria C42 makes it clear that the new generation of Bavarias will be more rewarding to sail with bigger, higher aspect sailplans, better ballast ratios, sharper handling under sail and more performance potential. Read on.