the last race ever? 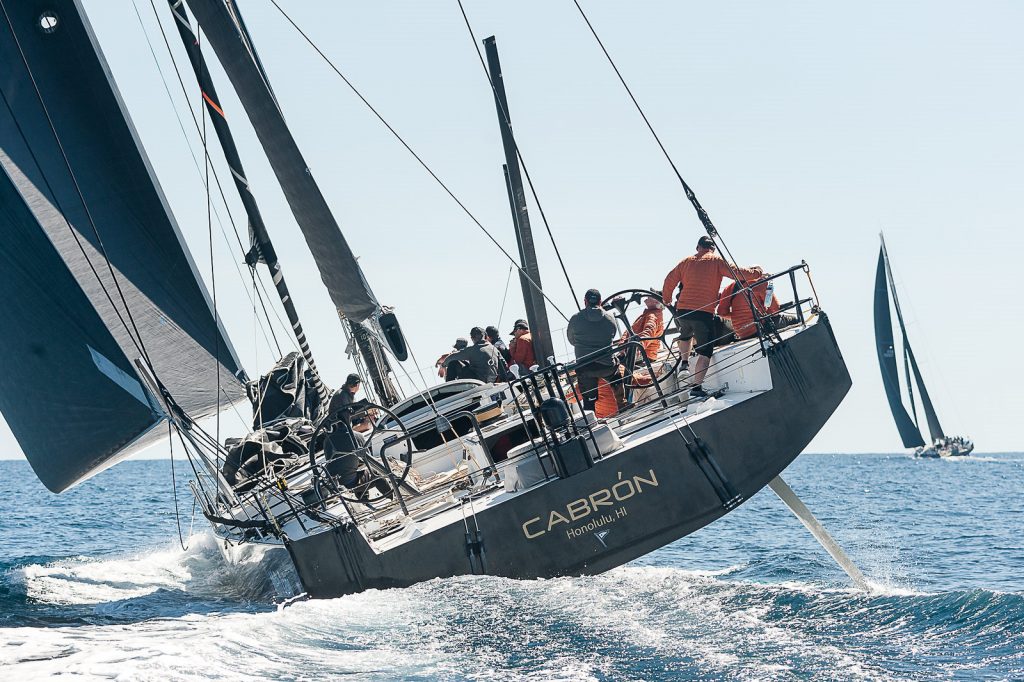 We are kidding, of course. Aren’t we? Anyway, here is a good race report from Alex Higby onboard the Botin 80 Cabron in the just completed and dreadfully slow San Diego to Puerto Vallarta race.

PV 2020 will sure be one for the books, the race started in classic hot rum conditions, a bit of a fetch out of the bay in light conditions. The Volvo 70 Pyewacket won the start and we were close on their tail with the Volvo 65 Viva Mexico a little late for the start. Halfway out of the cut we were able to unfurl our MHO and put the bow down, Pyewacket followed suit and we were off. The Viva Mexico Volvo 65 went early on the MHO and were pressed up and looking fast.

The positions did not change for the next few hours in a light 8-12 knots, the first bit of action came that evening when the breeze came up a little and we were able to use Cabron’s extra righting moment to roll over the top of Pyewacket and keep them to leeward. They were the first to gybe off in the predicted lift and we followed them in. They did a better job of sailing into the shore and we had lost our leverage.

This is where the split began, Pyewacket was able to sail off closer to land while we had to stay a little further off shore to sail our breeze, it paid off for them pretty well when the sea breeze kicked in the next day and they were able to leave us in their wake meanwhile we were bobbing around in 2 knots of nothing.

With Pyewacket opting to head offshore to pick up the extra breeze we realized we could not chase them down so we opted to sail the shorter distance down the rum line but in lesser pressure…high risk, medium reward as the models all showed different scenarios at the convergence of Cabo, most of them with us still behind. My old team mates (Team Mexico) on board my old boat (Abu Dhabi VO-60) Viva Mexico were also showing some great performance well offshore in a more consistent breeze.

Watching the scheds over the next few days were pretty painful, we made gains here and there but the net gain went to Pyewacket. Not too much to speak of for the next couple days, everything from a couple park ups to the occasional reaching/running in 20knots of breeze which Cabron took well in her stride. With the boat properly stacked and moded Cabron showed some incredible performance. The boys were kept busy with a lot of sail moving and changes, all made easier by Matt Smith who was in charge of the best food I have eaten while offshore racing.

The next obstacle was to tackle the lee of Cabo, according to the scheds it looked like Pyewacket had a fairly good run through but had a reasonable slow down, by the time we followed round we were averaging 18ish knots and getting into the confused sea state, a quick change down from the A3 to the J3 to heat it up with the GS inside and a reef we were through the light spot and hitting mid 20’s and on the final straight.
With a 40ish mile lead to Pyewacket it was not looking too good for the Cabron’s, still nobody was ready to give up, with a predicted midnight arrival a slow down and reset was possible, it was still very much on.
By 11pm we had managed to get within a mile or so of Pyewacket, and gaining fast.

The finish was quite unreal and something I will remember for a long time, match racing two high powered ocean racers in sub 6 knots of breeze just off of PV under a well lit moon was quite a sight. Tacking one of these boats in such light conditions with a MHO up is an art form and requires serious co-ordination. Both boats narrowly missed the virtual finish marks and were within 20 feet of each other but neck and neck, we realized the error and turned back around and sailed back through the line to get the win. Quite a relief after pushing so hard for so long. On the motor into PV after the finish big Mikey Howard was telling us in the 40+ years he had been doing these races down the Baja coast, this one had the most weather transitions.

Thanks to SDYC for running a very cool event, the hospitality before hand at the club and in PV was top notch.
Thanks to Matty Smith for the amazing food and top level pit work. ( Matty also supplies sailing teams with food as a business and it really is top level whilst keeping it lightweight, I think he calls it ‘freeze dry plus’)
Thanks to Josh Whittaker for running the boat and arranging all of the logistics, the boat did not skip a beat and is in incredible condition.

Finally huge thanks to the owner Steve Meheen for putting on such a great program and his wife Michelle who owns the amazing resort ‘Casa Carole’ in Puerto Vallarta, the hospitality and margaritas after a long slog down the coast were A1!

After growing up in the UK and smashing around the rainy English Channel, these warm downwind Cali races are where its at!