been there, done that 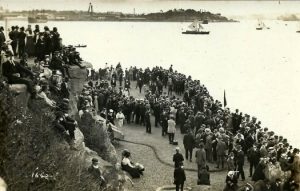 A century ago, soldiers returning to Australia from World War I were accused of bringing the ‘Spanish Flu’ home with them. It was a horrible epidemic. In the days before antibiotics it ripped through the urban population and thousands died.

And as with the current Coronavirus crisis, governments prohibited just about every type of public gathering. But, even at the height of the epidemic, the fanatical fans of 18-foot skiff racing on Sydney Harbour were not to be denied.

This rare archive photo (above), shows the spectator crowd assembled on Clark Island in 1919 as the fleet gathered in the distance for the start of their regular Sunday afternoon race. Look carefully and you can see that almost every person is wearing a face-mask. Some things never change.   – Anarchist David.

so i talked to ernesto today… Brief history of America