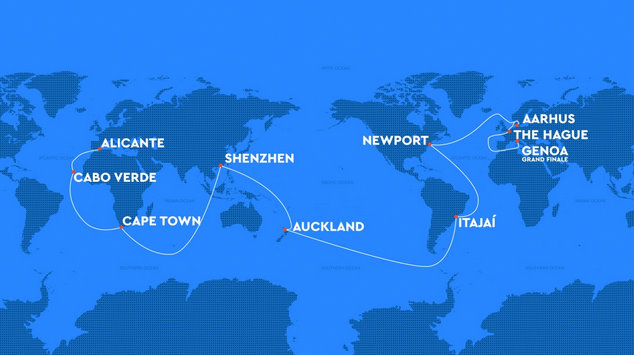 After holding their cards fairly close to the chest the organizers of The Ocean Race, formerly the Volvo Ocean Race, have finally announced the course for the ’21/22 edition. The race will visit 10 cities which is two less stopovers than there were for the previous edition and includes two Southern Ocean legs.

It’s the Southern Ocean legs that have been the real heart of the race since the very beginning so it’s good to see that they will be included even though the first leg out of Cape Town is kind of a half Southern Ocean leg. The fleet will dip into the deep south and round a waypoint before taking a sharp left hand turn and sailing north to the city of Shenzhen in China. Shenzhen is a new stopover port along with a stop in the Cape Verde islands and the finish, this time in Genoa, Italy.

This looks like a decent course to me bearing in mind that the race does not have a title sponsor and are not seeking one. Their funding is coming, presumably, from the stopover ports so it’s necessary to ‘follow the money’ to a certain extent. The course includes some of the old favorites, Cape Town in South Africa and Auckland, New Zealand. Both of these cities have been a part of the race since the beginning and are both awesome places to visit.

The race is going back to Itajaí, Brazil and then the good news which was recently announced, the race is returning to Newport, Rhode Island. Once they leave Newport and cross the Atlantic there is going to be some frantic racing in Europe with stops in Aarhus, Denmark and The Hague in the Netherlands before blasting down the Atlantic and into the Med for a finish in Italy – which presumably will be back open by then.

For the first time this upcoming event will raced in foiling IMOCA 60’s as well as in the old VOR 65’s from the previous few editions so there will be some incredibly exciting racing. Building on a legacy from the last edition, The Ocean Race 2021-22 will feature a new series of The Ocean Race Summits, an expanded version of their award-winning learning curriculum for schools.

The curriculum includes a robust science and data program as well as a heavy emphasis on keeping plastic out of the oceans. In addition all race teams will be required to use renewable sources to generate a proportion of the energy used on board in both the IMOCA 60 and VOR 65 fleets.

The 2021-22 edition of The Ocean Race is scheduled to start from Alicante, Spain in October of 2021 and stopover dates will be confirmed in due course. – Brian Hancock.

a tale of two parties