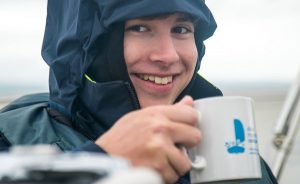 After twice surviving bone cancer, and having an amputation, sailing has given George Paxford his life back.
“Sailing has been my salvation twice.”

Ask Whitefriars Sailability’s George Paxford what impact sailing has had on his life and he’s unequivocal. George only turned 23 in February, but he’s experienced enough in that time for sailing to have transformed him into the man he is now.

George has had bone cancer (osteosarcoma) in his leg twice. First diagnosed as a nine-year-old in 2006, his cancer returned in 2018. That time, following months of chemotherapy, the best option for him to survive was amputation. He was 21 and in his first year of a Biomedical Science degree at the University of Birmingham. Read on.

tale of the tape