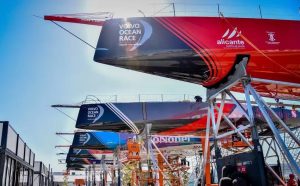 With the long awaited and expected announcement that Newport R.I. is to be the North American stopover for The Ocean Race the circle should be complete. WELL I say the circle is complete if it has a similar ‘shape’ to the last few races but The Ocean Race website still has no actual route announcement, just a list of cities that are stopovers.

Rhode Island Governor Gina Raimondo was clearly delighted with the prospect of “tens of millions in spending and economic impact.

Somewhat less accurately the Rhode Island Director of the Department of Environmental Management thought the stopover was the ideal venue due to combination of history, natural beauty, wind and world class public parks.  Given the fog and almost complete lack of wind that welcomed the leading boats at the end of the leg from Itajai the last time round I am not sure that everyone would agree with her especially the likes of Dongfeng which went from 1st (by almost 3 miles & 8 miles on 2nd & 3rd placed boats) to being 4th. It was painful to watch but I do admit to more than a tad of bias.

Having said that, without the lottery that turned the leadership, at the end of that leg, inside out there wouldn’t have been the 3 way tie as the boats left Gothenburg to stat the final leg to Den Haag and the nail biting finale to the 2017-18 edition.

So the Circle is now complete –  or so it seems – so there should now be no excuse regarding sponsors holding back because they don’t know where they would be pitching their wares and whether those stopovers gives them sufficient B2B opportunities or B2C exposure to turn a team sponsorship or support into a positive Return on that Investment (ROI).

The are those naysayers who will say it’s not like the old Whitbread or Volvo Ocean Race and with 4 crosses of the equator and not enough Southern Ocean elements with some even wanting the race to just go down the Atlantic, stop in South Africa, turn left, Stop in Oz, keep going stop in South America and then up the Atlantic to home. To them I would say “on you go mate – oh, but by the way, who’s paying for it?”

For over 30 years the race has been dependant on sponsors. If the route didn’t provide the sponsors access to what they considered their key markets to provide  sufficient B2B or B2C opportunities to raise their bottom line by more than the cost of the race (+ve ROI) they wouldn’t be there. It is a clear case of “he who pays the piper calls the tune”.

If you don’t believe me, google, bing, wiki, whatever you like and you will find there have been less than a handful of private entries, including those sailing under the banner of a sustainability foundation.

The race went to Abu Dhabi (twice) because not only did the Abu Dhabi Tourism Authority (the sponsors) not only sponsored the team they also sponsored the race. The race comes to China because virtually all the sponsors for the past 3-4 editions have business interests in China – again check it out if you don’t believe me.

Perhaps you know half a dozen or a dozen companies who don’t care about an ROI or how much they spend on a yacht race or a similar number of owners who can a) afford a campaign while simultaneously being able to afford  b) take 9 months away from running their business and c) would be inclined to actually take part in the race anyway or to pay for someone else to have fun.

If you do – well done! Because you would be doing something subsequent Volvo Ocean Race management teams had failed to do for 30 years, you could be the new guru of global offshore yachting! – SS.