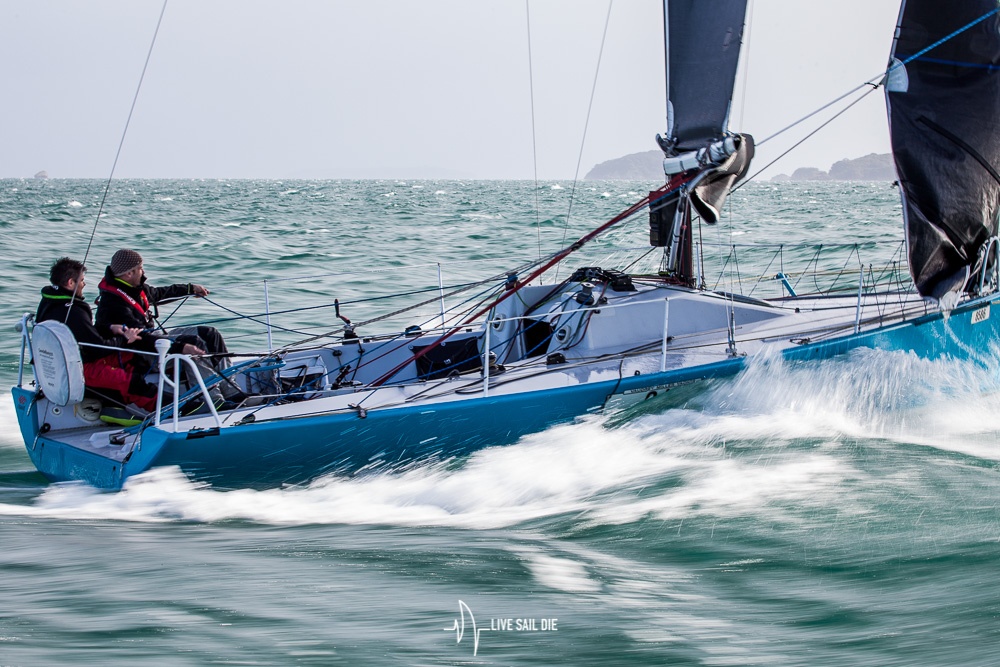 As the last of the fleet sails back into Auckland’s Westhaven, one of our favorite races to follow has drawn to a close and we recede into another dreaded bout of tracker-withdrawal. SSANZ’s doublehanded Round North Island race, sponsored by Evolution Sails, has finished with a glamour fourth leg into Auckland. When it was all said and done, one of the most famous sub-40 footers on the internet has been masterfully sailed to claim a very close overall win.

Big props to Jamie Logan and Steve Mair on the Bakewell-White 37 Clockwork (formerly the General Lee) for sailing well in a wide range of conditions to claim the overall victory by just under ten minutes after more than five and a half days on the water, spread out over four individual legs.

Winning the first leg of the race overall, Logan and Mair continued to put up consistent results though out the regatta. With Rodney Keenan of Evolution Sails and Mike Beasley sailing the ‘family cruiser’ Beneteau First 47.7 Laissez-Faire II, they had their hands full the entire time. After Keenan and Beasley sailed Laissez-Faire II to a convincing overall win in the mostly upwind conditions of Leg 3 from Wellington to Napier, it was anybody’s race to win overall. Before the long beat that was won by Laissez-Faire II however, the boys on Clockwork got their own moment of glory when they blasted out of Wellington with a kite up and got caught on film rolling a TP 52 in the process.

In the mostly benign off-the-breeze conditions of the fourth and final leg from Napier to Auckland, Clockwork again managed a top finish of 1st in Division, 2nd overall to seal the very narrow overall win over Laissez-Faire II. An incredible result for the Bakewell-White 37 but also an impressive performance for the big Bene First 47.7, a design which continues to earn hardware all over the world. Both boats were in Division 2.

Rounding out the podium in third overall and first in the premier Division 1 was the radical canting-keel 40-foot Cape 40 Mr Kite with multi-time Volvo and AC veteran Craig Satterthwaite and close mate Nathan Williams onboard. Not far behind in fourth overall and second in Division 1 was the Brett Bakewell-White designed YD 37 – recently lengthened to be a YD40 – Anarchy, and sailed by AJ Reid and his son Will.

Massive tip of the cap to Damon Jolliffe and Josh Tucker for sailing the classic green Elliott 10.5-meter Motorboat II do a win in the competitive 11-boat Division 3. The boat, formerly the Squealer, has been optimized and modernized over the years and proved she’s still fast by winning the biggest division in the fleet by an incredible 12 hours. Perhaps one of the biggest shout outs of all however has to go to the two young guns Ben Beasley and Nick Gardiner on the Elliott 7.9 meter Moving Violation.

Relying on good boat speed and seamanship, as well as some ballsy tactical moves the 19 and year 20 crew won Division 4 convincingly, sailing the smallest boat in the entire fleet. Doing the race to raise money to help train suicide-prevention hotline volunteers, the boys are painstakingly close to their goal of $9,000 raised. They only need $900 more!!! Wouldn’t that be cool if the SA community could band together to help the boys bridge the gap and maybe even save someone’s life.

Well done to all the sailors, the SSANZ and also to our friends at Live Sail Die for killing it on the media as usual.  – Ronnie Simpson.