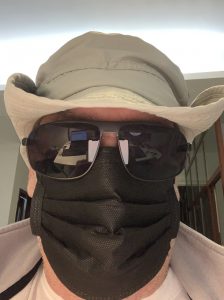 Sadly the virus that, in effect, shut over 50 million Chinese in an open prison in Hubei Province in one of the most aggressive or ambitious quarantine actions is spreading around the world.

The battle does appear to be on two fronts with the health ‘industry’ attempting to control the spread while the virus seems destined to defeat them on so many fronts. Alongside this while some governments attempt to downplay the risks on one side against the media – who must be pretty light on other copy at the moment -appear to be spreading fear and panic with the virus being mentioned in articles with only the most tenuous links to illness of any sort.

But what is it really like on the inside of the epidemic which does appear to be heading inexorably towards that dreaded term ‘pandemic’.

I am a Brit, living in China and therefore living inside the regime of caution and control that is the Chinese authorities largely successful limitation of the spread of the COVIR-19 virus. And let’s put things in perspective from the get-go. China – population approx. 1.4Bn,  total cases around 90k.

The whole thing started and grew into the authorities awareness at the absolute wrong time when literally millions of migrant workers were heading home for the annual Spring Festival, for many the only time each yea they would be able to see and commune with their families in the rest of China.

It is easy to say mistakes were made in the early days, particularly in getting the information out, but once it was realized this was for real things quickly swung into action and while not pleasant the fact that most of China’s large cities have recorded zero new infections for approaching 2 weeks shows that the strategy appears to have worked.

It has, and continues to be lifestyle limiting  wit even a trip to the supermarket meaning a temperature check entering  the car park with another at the entrance to the supermarket then on returning home yet another as you enter the residential estate.

Sports events, the cinema and any large gatherings have been cancelled or banned as is starting to happen elsewhere in the world and business meetings take on a new dynamic as it is very hard to read people’s facial expressions while everyone is wearing a mask.

On the subject of masks, I strongly disagree with the opinions of so called experts who only look at one aspect of that item. Perhaps they are not much protection against the virus landing on you but is shows a common courtesy that your own cough or sneeze will not spray outwards as readily. Also importantly it shows that the individual is taking the risks seriously. Certainly hand washing and sanitizing is important but here in Nansha, a suburb of Guangzhou mask wearing is 99.99%.

China’s economy is taking a hit and perhaps the strong and radical action which, I have to say has been followed by almost 100% of the citizenry might not work in other countries but it has here.

Is it serious compared to other epidemics/potential pandemics? Some poiticians have said it is a small matter or not important which I label bullshit, especially if you are one of the fatalities who have died as breathing becomes more and more difficult and eventually impossible, or indeed almost as much an impact of relatives and close friends. But where in the overall league table of such events does CORIR-19 sit.

That league table by the way is almost completely filled with coronaviruses – they are particularly adept at infecting we humans.

Top of the league by a huge margin is the Spanish Flu which many researchers believe may actually have started in Kansas. It infected 27% of the then world population and killed 17-50 million people with some estimates ranging as high as 100 million people.

Even the current seasonal flu in the USA has killed between 16,000 and 41,000 in the USA according to the US CDC with some estimates putting the death toll in the high 70 thousands with 16 million people sickened by that particular virus.

The unknown is in my theory – no-one really knows where this is going, when it will stop  – coronaviruses are usually burnt out by, amongst other things good weather, low humidity and the like but in truth there is no concrete knowledge. There is also no current vaccine, how could there be, the disease is too new.

The other reason is the media stirring people’s fears, COVRI-19 is mentioned in the most irrelevant articles online, journalists (now there’s a loose term) need to do their research better and bring some true perspective to the situation.

I could be wrong ( but I doubt it) but I hardly think that this virus is the apocalyptic event some are painting it as. I don’t think we need to add COVIR-119 to the list including the giant asteroid or the super-volcano as he beginning of the end of mankind.

I think that China has handled this crisis as well as anyone could, if not better. How many countries could build two hospitals in less than 10 days. Some countries proudly announce they sent out 15,000 test kits over the weekend – that’s not enough for even a city if this thing really gets a grip. Some governments need to wake up to that possibility.

Now that China has its house in order (most provinces have experienced zero new infections for the past week) they have announced in the past 48 hours it may introduce travel restrictions on people from certain countries where the control of the spread of the disease is, or hasn’t been, so thorough or complete – as an example I have just had to hand in my details and where I have been for the past 14 days. Clearly they don’t want their efforts undone by reinfection from a country less well prepared.

For sailing, like other competitive sports things have come to a virtual standstill. Things being everything from regattas, through boat shows to major projects all slowed to a halt or near halt. Even most marinas in the country are still in lockdown being held on tickover by relatively skeleton staff.

Being outside Hubei province, apart from no cinemas, sporting events, don’t forget your mask, some of the usual shops still not open, supply chains interrupted daily life goes on and most of the aforementioned list can be worked round, adapted to or be done without – at least temporarily.

Spanish, Swine, Bird, Hong Kong, Asian, SARS, COVIR-19 were or are all pretty scary (note how many got a grip in humid climates).

It’s not over yet, far from it but with a bit of luck it will all be a memory as we watch the Tokyo Olympics Opening Ceremony. If not, it will be the only time except for war that event has not run as scheduled.

It takes caution by us all not just a few, masks and the constant whiff of isopropyl alcohol on one’s hands is perhaps not cool but compared to the potential alternative I’ll forego cool for  while. – SS.

the trial of speed