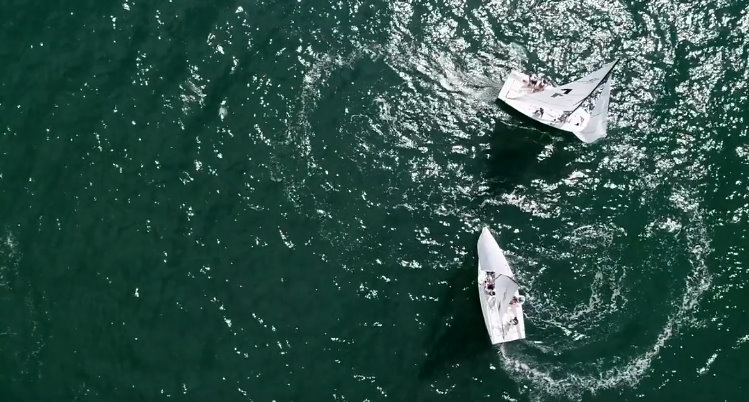 A team from the Big Island, as many Kiwis like to call Australia, came across for a spot of match racing and lifted the Harken International Youth Match Racing Cup held by the Royal New Zealand Yacht Squadron in an event that ran from  25rd February to March 1 on the waters just down tide from the Auckland Harbour Bridge and right off the Royal New Zealand Yacht Club

The team of Harry Hall, Louis Schofield and Nick Rozenauers  from the Cruising Yacht Club of Australia Youth Sailing Academy led by skipper James Hodgson faced local RNZYS team led by Jordan Stevenson in the final having dispatched the in form skipper Nick Egnot-Johnson in the semis while Stevenson had seen off one of the furthest travelled competitors in Aurelien Pierroz from the ‘Societe des Regates du Havre, France.

In the first race of the final Stevenson laid down the gauntlet on Hodgson, handing the Aussies a penalty on the final leg of the race but that was to be the last point the New Zealand team would see on their side of the scoreboard during the final.

In race 2 Hodgson’s blistering downwind speed gave him the win assisted by a spectacular Stevenson wipe-out, Elliot 7s are not always the most forgiving of boats in a breeze and there was plenty of that around during the event.

Here then followed a 1 hour rest break – for the boats and a few breakages meant racing had to be suspended to put them both back in order.

On the restart of proceedings Hodgson carried his way through the next two races to close out the event which was a real sharpener for those entered given that the following week would see the Worlds being sailed on exactly the same waters off the ‘Squadron’.

As I started to write this the Harken Youth Match Racing World Championships had just completed the round robin stage with all of the semi finalists  from the previous week ‘up there’ in the standings with Egnot-Johnson on 64% and Stevenson & Hodgson on 73% and Aurelien Pierroz on 55%. Top of the tree however was Finn Trapper (AUS) who didn’t compete last week but was on an unbeaten 100%.

It was looking like it would be a bit of same old – same old going into the quarter finals and indeed those mentioned above were there but joined by Parkin (USA) Kjaer (NOR)  and after scoring the same Bowers (GBR) defeat of Wood (USA) in their match meant he joined the other 7 in the quarters.

Egnot-Johnson dispatched Pierroz in a straight 3-0 while Tapper handed out the same to Blowers. Kjaer managed to take one off Hodgson with the surprise at this stage being that Parkin who only finished 7th in the round robin took out Stevenson 3-1. He then went on to record the same score in the Semis, this time against Tapper after losing the first race.

The other semi final was a see saw affair with first blood going to Egnot-Johnson. The score then went 1-1; 1-2; 2-2; 2-3 with the final honours going to last week’s Harken International winner James Hodgson.

So to the final where Jack Parkin was whitewashed 3-0 by James Hodgson giving him two titles in as many weeks making his trip across the Tasman Sea more than worthwhile. – SS.

black to the future