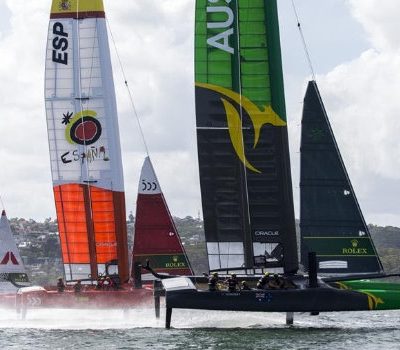 The trouble with ‘all-or-nothing’ sporting events is that you can sometimes end up with, er…. nothing.

And so it was with the first round of Season II of SailGP just concluded on Sydney Harbour. The weather was close to perfect, the crowds quite respectable but the racing itself was as dull as dishwater.

Races that take no longer than 15 minutes to complete mean that the first boat to the first mark will usually win. Ben Ainslie’s GBR outfit had superior boatspeed in all six races, easily winning five (and sandbagging in the other heat because they’d already secured their place in the final).

As for the ‘winner take all’, ‘sudden death’, ‘all-or-nothing’ match race final, the Australians incurred a penalty in the pre-start that cost them 200 yards and what was billed as a nail-biting climax became a pointless, boring procession.

More concerning for those with a long-term stake in this resumption of Larry and Russell’s Grand Foiling Folly is that the public and media response has, so far, been profoundly underwhelming. Newspaper coverage in Sydney on the morning after amounted to one short single-column story on page 19 of the sports section.

So it’s worth taking the time to ponder why, despite the quality of the athletes involved and the amazing speeds of the boats, this multi-million dollar attempt to elevate sailing into the elite international world of Grand Prix racing seems to be drifting towards the terminal Doldrums.

The publicity hacks for SailGP have already had to withdraw many of their extravagant claims for the crowd and TV audience sizes they say were attracted by the first series last year. Had even half those numbers been verifiable then new sponsors and advertisers would now be throwing in plenty of dollars to get a piece of that international exposure.

Instead, just one team (the Danes) have secured a major new naming sponsor while the Brits have Ineos onboard as part of their America’s Cup campaign. The skippers of the other boats say they’re under pressure to find some new sponsorship money themselves (see: SailGP RIP? SA 22 Jan 20).

None of this is to say that the racing wasn’t worth watching. Anyone with an interest in the sport will always be drawn to the spectacle of great sailors racing each other in extremely fast craft.

So why is SailGP still continuing to struggle for traction? There are, to my mind, two core problems.

The first is the structure of the whole series. The circuit has no continuity or established schedule pattern. Once it begins there are long gaps – up to two months – between races.

By contrast, the F1 and MotoGP races are usually no more than a fortnight apart, even when they have to move between continents. And, as previously noted, there just aren’t enough hours of on-water SailGP action to justify the hype or TV time.

The other great weakness of the concept is that it is, essentially, an invention.

It hasn’t evolved naturally or been developed from within the established championship conventions of the sport. Consequently, it has no history or traditions to build on. Unlike the Olympics or World Championships, it carries no inherent prestige or resonance with the sporting or general public.

The nationality of the boats and teams is transparently arbitrary. The multi-national skippers and their crews are a collection of very good professional sailors and ‘grunt men’ selling their skills and strength to whichever team will pay the best price this year. They generate no convincing patriotic allegiances, and therefore no solid national fan base.

Meanwhile, given the incredible pace of development in the foiling world, the boats seem destined for obsolescence no matter how clever the designers and support teams are at devising upgrades.

The whole event will need fresh ideas and energy to survive. Does Mr Ellison have the will to finance a whole new class when the current machines inevitably lose their luster?

is the answer me?