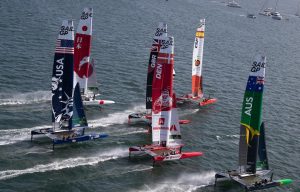 As we have reported before, China is out of this series and that can’t be good for this series. Regardless, Brian Hancock breaks it down for you.

The second season of SailGP got underway today in Sydney, Australia. SailGP, as you may remember, is that series of events raced all over the world in the old America’s Cup AC50’s. To jog your memory they are the same boats that raced for the Cup in Bermuda. SailGP, however is fleet racing not match racing and this time there are seven teams competing; the returning champions Australia, Japan who finished second last go around, the UK and France, perennial rivals, the United States and two brand new teams, one from Denmark and the other from Spain. The only team not returning is China.

A quick look at the sailors competing reads like the ultimate who’s who in professional sailing. Sir Ben Ainslie is skippering the UK entry and they dominated the first day of racing with three bullets. Ainslie won medals at five consecutive Olympics from 1996 onwards including gold at the four Games held between 2000 and 2012. And that is just getting started on his resume. Tom Slingsby, who skippered the Australian team to a win in the inaugural SailGP series, won three consecutive world championships in the laser as well as winning a gold medal at the 2012 Olympics.

Then there is Nathan Otteridge who is most famous for winning a gold medal at the London Olympics and a silver medal in the Olympics in Rio in the 49er class. The list goes on. My point is that when you get so many talented sailors with such a fierce will to win and egos the size Mac trucks you know that you are going to see some great racing.

The courses are inshore stadium style meaning that they are designed to allow as many people as possible to watch the racing. The legs are short and intense. As Slingsby noted, “Sydney Harbor can suddenly become very small when you are traveling at 50 knots.” In the first round of racing that took place today there was no lack of breeze or excitement.

A steady 15-20 knots of southerly wind made for some really tight racing. While much of the attention going into the event was around the brewing rivalry between Ainslie and Slingsby, the most tense moment of the day involved Spain and France. Phil Robertson and his Spanish team were heading toward a race boundary where they lost their rights to France and eventually clipped the French yacht forcing the French to retire from the final two races.

The SailGP race jury determined the Spanish team inflicted serious damage to the French boat and docked them a total of nine points – five points from the first race and an additional two points for each of the two final races that France was forced to miss. A little bit of international warfare to kick the series off.