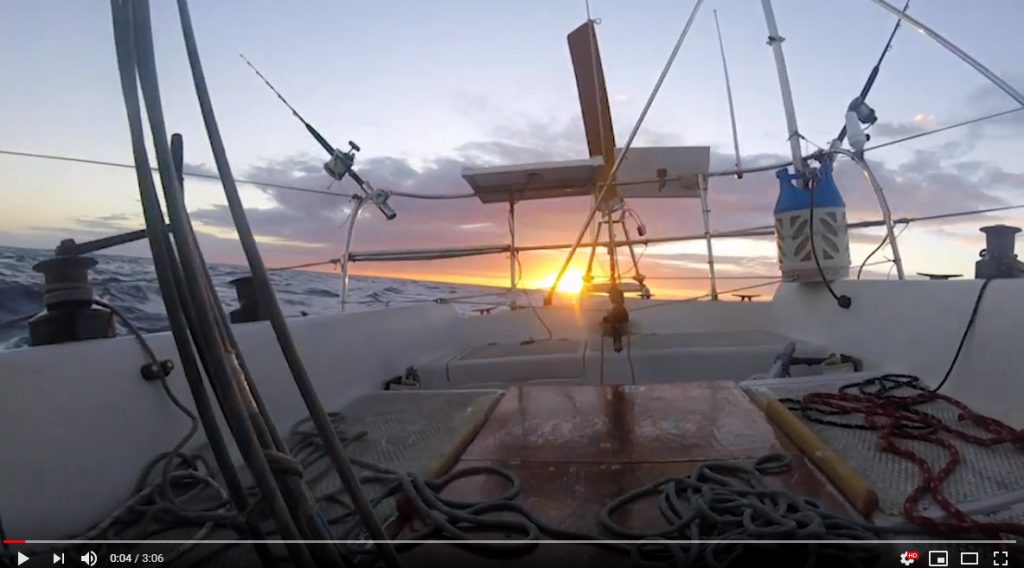 Ronnie Simpson is a dear friend and active contributor here at SA, so we want to help him reach for the the next adventure…

After more than three years, an extensive re-fit and more than 7,000 miles of sailing, it is now time for me to sell my boat. It’s been a hell of an adventure, here’s the story and my offer:

In mid-January of last year, I departed Hawaii on my Peterson 34 Quiver with the intention of doing a fairly quick, surf-focused westabout circumnavigation mostly doublehanded or with crew. With my two planned crew bailing right before the first leg however, I was forced to go solo. No biggie, it wasn’t the plan but I still wanted to go sailing and had plenty of confidence in myself and the boat. Seventeen days later I sailed into Majuro Atoll in the Marshall Islands with a fridge full of fish and some damn good memories. With well over 1,000 miles of shake-down sailing in the windy Hawaiian Islands and a very extensive re-fit, the boat proved to be well prepared and absolutely crushed her first bluewater passage under my ownership. The only thing broken was my masthead windex from a curious boobie on the second night!

The plan was for a quick stop over; maybe to catch a bit of surf at Alinglaplap Atoll and then head further downwind towards the Federated States of Micronesia and the island of Pohnpei and it’s famous wave at Palikir Pass. Cruising plans have a funny way of changing however. My girlfriend at the time flew into the Marshall Islands on two separate occasions to sail and score local surf with me, while I also undertook a project building a custom nesting dinghy that stretched out to more than a month. One thing led to another and I was now firmly behind ‘the schedule’. Right about that time, a series of rather unprecedented and out-of-season cyclones formed and ripped through Micronesia and right along my intended route.

Jumping across the equator to a South Pacific paradise with stellar surf, great cruising and a pretty social traveller and cruiser scene started to look like the right call. Again solo, I cleared customs and pointed the bow south for western Fiji and it’s famous waves including Cloudbreak. I had been to Fiji five years before on my little engineless Cal 2-27 MONGO and in my newfound situation, Fiji once again called to me very strongly. After getting caught with caught with weed and let go scott-free in Tarawa Atoll, Kiribati and then getting caught up in a Customs Department corruption ring on Funafuti Atoll in the tiny nation or Tuvalu, I came ripping into Fiji on a windy reach again with a fridge full of fish and a Peterson 34 that was firing on all cylinders. Life was good and the surf was even better.

One thing led to another and 7 months later I began applying for visas to start a surfing, standup paddle board and charter company in Fiji. Based at Musket Cove Resort (home of the famous Musket Cove cruiser’s regatta in September) on the beautiful island of Malolo Lailai, i’ve got a sweet little business that i’m setting up and should be open soon. Just a few miles from some of the best surf on earth, I now have an investor visa that will afford me a license to do a lot of interesting things including yacht charters. Quiver is the perfect boat for one or two people to go long-distance cruising on, but to run surf and day charters, I am aiming to get something very fast, affordable-ish and with two or three hulls.

Hence, the Quiver is now up for sale. Having been doing a bit of writing recently for SA, the Ed said I could shamelessly use the front page to pimp my yacht so that I can try to get my hands on a fast little catamaran for charter. So here’s my offer. $30,000 US Dollars, firm on price, and completely turn-key to go anywhere in the world you want to go right now. She doesn’t look the most flash and could definitely use some bottom paint, deck paint, interior cosmetic work and a bit of love, but all of the important bits are done. If she doesn’t sell, no worries, i’ll drop 3 or 4 grand into her and fluff her, buff her and turn her into a certified charter boat for day trips and surf trips. Here’s the deets:

Tiller-steered. Quarter-berth on starboard side, forward facing nav station, galley to port, one open pilot berth in salon and a V-Berth that is normally full of surfboards and toys.

An ad will be placed on SA soon. Boat is lying at Musket Cove in western Fiji, near to Nadi Airport and Port Denerau. Boat is still being lived on and sailed multiple times a week, including a trip to Cloudbreak this weekend.

Vinaka vaka levu from Fiji, someone buy my boat and go sailing so that I can get a cat

All inquiries on the boat can be sent to [email protected]