get your sheet together! 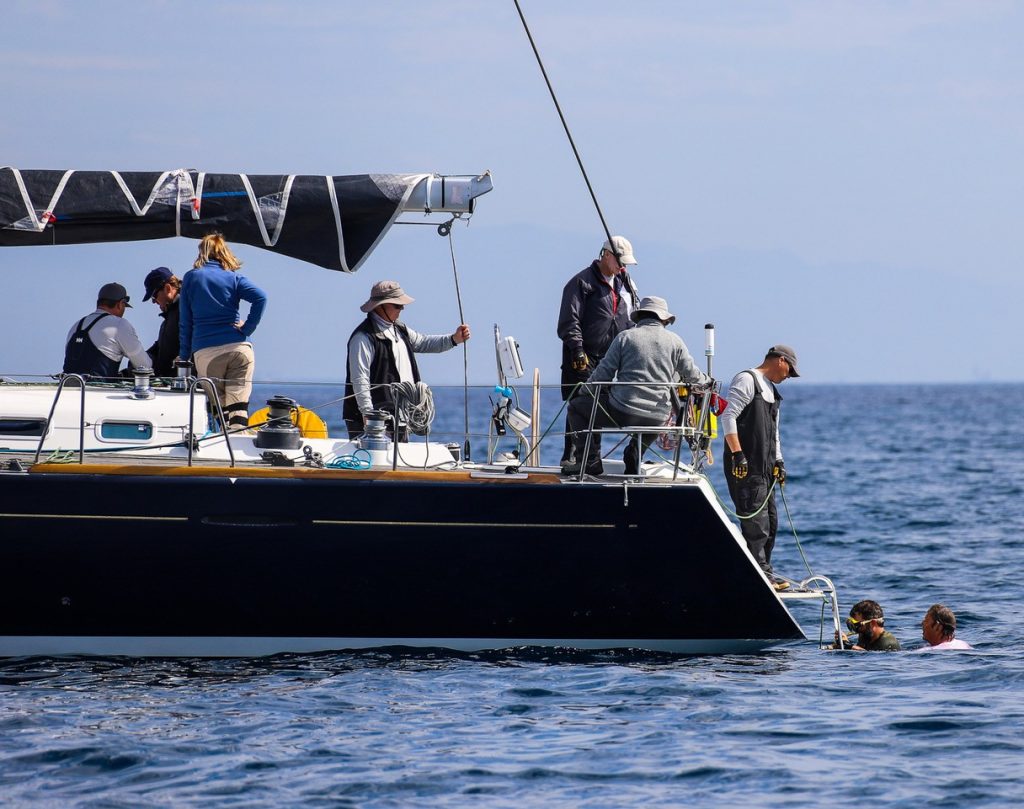 Note from Snapper: For you Instagram and Facebook scrollers with no ability to read, scroll down (as you do) to the bullet-point notes. For those who want to learn from others mistakes with some technical advice, please read on:

Last weekend’s 2020 SDYC Islands Race had a lot of promise for our team on Lady Max, a San Diego based Beneteau 47.7 with the standard rig and keel. We tend to pick our races and events favoring those with winds above ten knots and in past years the Islands Race has delivered the goods, for the most part.

The Islands Race,  was actually the ‘Island’ Race this year because the Navy were blowing things up on San Clemente Island preventing the normal transit from Long Beach around Catalina, San Clemente and then finish in San Diego. This year the fleet had to just get around the North end of Catalina and make a beeline to the finish. The forecast went back and forth but overall looked promising.

This was to be my second Islands Race. The first one in 2013 didn’t end so well with the tragic loss of life aboard the Columbia 32 Uncontrollable Urge and the rudder breaking on the boat I was on – the FT10M Mile High Klub– with resulting Coast Guard intervention. That story is here.

On race day Friday, we get to the start area early and, with the Southerly influenced wind direction in effect, did a practice start setting the Code 0 and furling the #1. All went well and we furled up the 0 and gybed back to the start line. I should note the engine was running the whole time in neutral. This is where things went pear shaped quickly and this is where this becomes an educational article for all.

I wanted to get back to the start line area so had the owner put the put in gear and within a second our race was done.

We wrapped the port spinnaker sheet on the prop shaft and other than the normal expletives, realized we had an issue. One valiant crew quickly volunteered to go in and check it out. We had a problem – a high tech line double-wrapped on the strut and prop and under thirty minutes to get it sorted before our start. We end up with three people in the water working on it frantically but with time ticking away it was apparent that we were not going to make the start.

The sheet was anchored at the pulpit and at the winch. For whatever reason, there was slack in the sheet and a big enough loop to grab the prop (yes, poor line management), and in doing so, the torque on the sheet bent the pulpit and we had a fully loaded sheet to cut. Knives were flying and all three people in the water were taking turns cutting and making progress. Suddenly there was a loud popping sound and the sheet tensioned was eased. One of the guys in the water noticed the bilge pump was pouring out at full speed so one of the crew, Tim, ran down below and checked the engine compartment and discovered the entire bilge – fore and aft- was full of water and it was almost at the batteries level!

This is when what seems like a simple fix gets get complicated and with water pouring in, you need to jump into gear.

Luckily, Lady Max has two large hand pumps in addition to the normal Whale type cockpit pump. I say luckily, because without them we were in big trouble! The hand pumps had long enough discharge hoses to get them up to the cockpit and frantic pumping ensued ultimately getting the water level down to a reasonable level to assess where the water was coming in.

While this was happening, the guys in the water freed up the remaining wrapped line and came on board. We decided to fire up the motor to test if we were dealing with a bent shaft issue and how much water we would be dealing with underway. That was quickly answered.

The motor was quickly shut off and we realized the scope of our situation. What had happened was the sheet had double wrapped around the strut due to the loop. The force of the line binding on the shaft by the cutlass bearing pulled the shaft forward causing the leak. We tapped it back into place and the leak stopped then started with the motor again and saw no noticeable water coming in. We had some concerns about transmission issues but all seemed well.

We had the Coast Guard apprised of our situation and they sent out a boat to escort us in. Of course, they also decided to board us and do a full inspection to make sure we were in full compliance with all required equipment, which we were. The Coast Guard really do an amazing job and we are lucky to have them out there!

With the situation under control and being able to safely motor without any water coming in, we headed to Marina Shipyard across from Long Beach Yacht Club for them to evaluate the transmission and possible shaft issue. They made some adjustments and we were given a green light without any need to haul.

For the previously mentioned scrollers, here are the important takeaways:

There will be the typical SA posters with 100K posts to their name stating the obvious that we should have been more careful and paid more attention to sheets. Can’t do much about that after it’s happened and it was an example of when things go bad they can go really bad – quickly. For us, the boat is safely back in San Diego and you can bet we’ll have our sheet together the next time!

on the half shell?