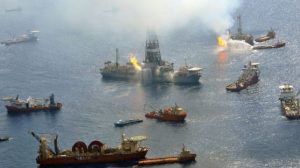 Not to worry, people! President “I don’t give a fuck about the environment” will make sure this never happens again.

Oil spread beyond the known satellite footprint of the Deepwater Horizon oil spill, according to a new study led by scientists at the University of Miami.

The Deepwater Horizon exploded on April 20, 2010 releasing 210 million gallons of crude oil into the Gulf of Mexico over 87 days. Oil slicks from the blowout covered an estimated area of 57,000 square miles (149,000 square kilometers).