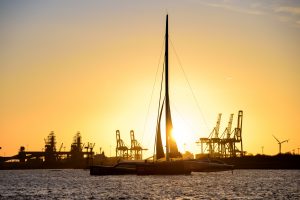 Congrats to Francis Joyon and his crew of Bertrand Delesne, Christophe Houdet, Antoine Blouet and Corentin Joyon onboard IDEC Sport for setting a new reference time of 31 days, 23 hours, 36 mins and 46 seconds along the Tea Trade Route from Hong Kong to London.

Sailing at an average speed of 20.7 knots over 15,873 miles sailed, the crew has knocked an impressive 4 days and 2 hours off of Giovanni Soldini and Maserati’s two-year old record along this prestigious Clipper Route that spans nearly half the globe.

This is just the latest feather in the cap for a boat that holds the Trophy Jules Verne and an incredible three straight Route du Rhum victories. Bravo Francis Joyon and the entire IDEC Sport team!

By lowering the record time for the Tea Route between Hong Kong and London to just over a month, Francis Joyon and his crew of four on the IDEC SPORT maxi trimaran have not only smashed Giovanni Soldini’s time by 4 days, but also divided by three the time it took the big clippers in the second half of the 19th Century to sail this route, as they fought a trade battle to be the first to bring the leaves for the revered brew back to London.

Throughout the 15,873 nautical miles sailed out on the water at an average speed of 20.7 knots, the maxi trimaran went through almost all the wind, sea, sun and temperature conditions imaginable with a series of surprises and unexpected hurdles, as they sailed sometimes smoothly and sometimes in highly uncomfortable.