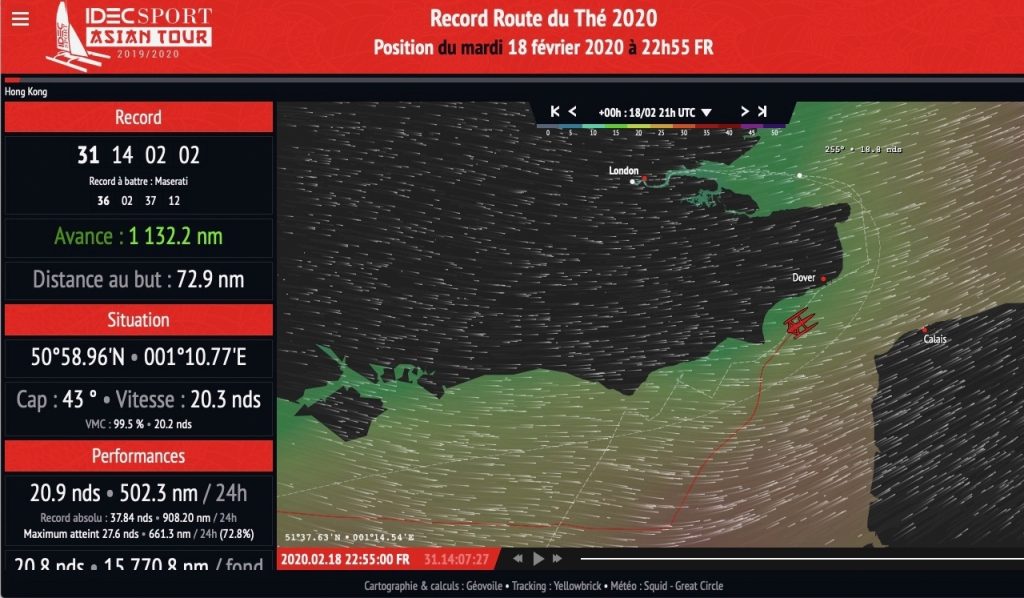 Since being slowed down in the South Atlantic Ocean and when crossing the doldrums – briefly falling behind Maserati’s record pace – Francis Joyon and his crew of Christophe Houdet, Bertrand Delesne, Antoine Blouet and son Corentin Joyon have lit the afterburners onboard the 105-foot maxi trimaran IDEC Sport.

Re-establishing a lead of more than 1,100 nautical miles in under a week, the crew is about to enter the River Thames and the last few miles towards establishing an impressive new record along the route from Hong Kong to London, better known as the ‘Tea Route’. A bit over 31 and a half days have elapsed as of this writing with just 70 miles left to sail.

With a previous record time of 36 days 2 hours and change, it appears that IDEC Sport will knock a solid 4 and a quarter days off the existing record time established by Giovanni Soldini and Maserati just two years ago.

While it’s sure to be all champagne, smiles and celebration once across the finish line at London’s Queen Elizabeth II Bridge, this record was certainly no walk in the park and has challenged Francis and his crew up until the very end.

“We are in survival mode,” Francis commented just two days ago, as he and his crew sailed along the bottom of an intense low-pressure system with big breeze and waves up to six meters tall; the latest in a series of storms to wreak havoc on western Europe. “We have to remain vigilant and focused right up to the end”, he added. “The squalls are very violent and come without warning… The wind suddenly strengthens so quickly that sometimes we find ourselves with a bit too much sail up.

You then really have to hold on tight to the helm and wait for the squall to pass over while getting soaked in the heavy rain.” After sustaining the worst of the big North Atlantic blow, the team had to carefully navigate the English Channel and all of the land and shipping-related hazards that that entails.

Once across the finish line in London, the team will bring this inaugural – and likely to never be repeated – Asian tour to a successful close. Since leaving Lorient’s Port Louis in late October, Francis Joyon sailed solo and smashed his own ten-year-old record along the 8,800 NM route to Port Louis in Mauritius, lowering the time by more than six days to a new reference time of 19 days and 18 hours.

Picking up his crew in Mauritius, the team then established two new records between Mauritius and Ho Chi Minh, Vietnam and then between Ho Chi Minh and Shenzhen, China before delivering to Hong Kong for a holiday break and then a crack at the Tea Route. Getting out of Hong Kong and China just in the nick of time as the Coronavirus has ground the region to a halt, the team is now just hours away from claiming a decisive victory in their attempt at the Tea Route.

welcome to the klub

Corona-cinema – the best drone takes from the Volvo Ocean Race