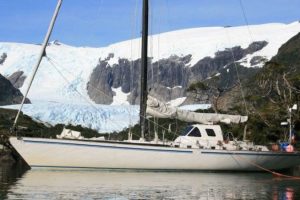 On March 5, 2019, the accident marked the French nautical community. The Paradise sailboat, offering cruises in Antarctica, lost its skipper, Arnaud Dhallennne and a crewmember, propelled overboard while the boat was laid down by a wave in formed sea conditions, returning from South Georgia.

Despite the searches, they could not be found and the sailboat was brought back safely by her second, Morgane Ursault-Poupon. Read on.