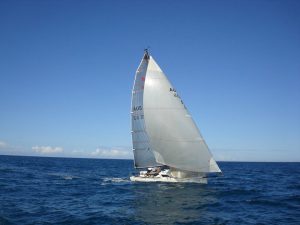 Ullman Sails Int’l is certainly no friend of ours, but they have a good take on this….

For years, the Code Zero, a flatter, more triangular-shaped sail for close reaching, has somewhat circumvented rating rules. Designed to fit within measurements for boats with non-overlapping genoas, the Code Zero measured in as a relatively narrow, flat spinnaker that could essentially be almost three times the size of a non-overlapping jib, whilst attempting to maintain a similar shape to a reaching genoa.

However, this is set to change due to new rating rules from the Offshore Racing Congress (ORC). Amongst the summary of changes for 2020 that emerged from the Annual General Meeting of the Offshore Racing Congress (ORC) held in October last year was that; “For asymmetric spinnakers with SHW/SFL in range of 0.75 – 0.85 aerodynamic forces are calculated with both coefficients for the spinnaker and for the headsail set flying with one giving faster boat speed taken as final.”

What this essentially means, is that the new rule does not make the 75% mid-girth Code Zero illegal under the ORC rules but what has changed is the aerodynamic evaluation of such sails. This is an effort to more accurately reflect their performance and as a consequence could result in a potential increase in rating for boats carrying such sails, which might lead to a different approach going forward. Read on.