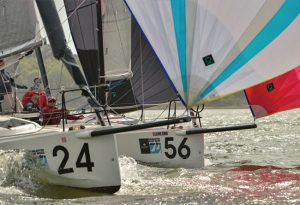 When you put a boast out there, you’d better back it up. And that’s just what the people who are behind Sperry Charleston Race Week, the largest multiclass gathering in North America, do. For the better part of the past decade, they’ve billed their event as “a regatta unlike any other.” Fortunately, the claim rings true.

Race Week, as locals refer to it, has evolved to become a fixture on the US sailing scene. For four days in early spring. Competitors from throughout the US and around the globe make an annual pilgrimage to this coastal city in the southeast.

During the day, it’s top-level competition with some of the world’s best racers competing. Off the water, it’s equal parts mad party and sailing industry conference. Think Mardi Gras meets Dussel-Boot meets Cowes Week, but on an intimate scale. Read on.