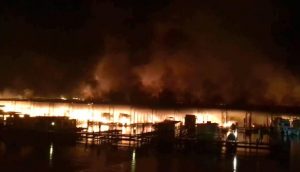 At least five people died and more are missing after an overnight fire destroyed a dock of about 35 boats in Jackson County Park in Alabama, authorities say.

Two bodies have been recovered from the water, according to Chief Deputy Rocky Harnen with the Jackson County Sheriff’s Department. In addition, six or seven people remain unaccounted for, Harnen said.
“They had slips here,” Harnen told CNN affiliate WAFF. “That doesn’t mean they’re in the water and it doesn’t mean they’re dead. We’re making attempts to find them.”
Most of the boats at the dock were houseboats, the Scottsboro Fire Department said. Read on.
editorJanuary 27, 2020
Leave a reply