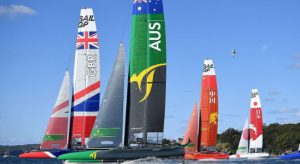 Well, that didn’t take long. Even before the second year of his four-event series gets underway in Sydney late next month, the financial cracks have begun to appear in Larry Ellison’s much-hyped SailGP extravaganza.

It was Tom Slingsby, Australia’s winning skipper from 2019, who let the cat out of the sail bag. Speaking to a local website he revealed his team is already working against a dollar deadline.

“We have been told that unless we get some partners on board and some sponsorship dollars in, that we are going to be vulnerable,” Slingsby said. “By the end of this season we need to have made some inroads into this crucial area in order to secure our future.”

So here’s the bottom line: what was originally thought to be a five-year window for each entrant to become self-funding now appears to have been reduced to just two years. No cash by 2021, no splash. That’s a tough call, especially for the Aussies who hail from a nation never known for its strong corporate support for sailing despite producing many of the world’s best sailors.

What emerges from all this is a key factor that has been kept very quiet so far: the Coutts/Ellison concept for SailGP apparently owes a lot to the F1 Grand Prix motor racing model where the major auto and engine manufacturers pour hundreds of millions into their teams every year to support the travelling circus.

That may be workable in the multi-billion dollar car industry where the mega-corporations can write off their Grand Prix expenditure against R&D and promotion. But sailing is an entirely different competitive environment. It is a minority sport. There are no high-volume consumer brands that carry a direct relationship with the on-water SailGP action: no equivalent to Mercedes-Benz, Renault, Honda, or Ferrari.

The other great weakness in Ellison’s attempt to replicate the motor-racing financial model comes in the key area of television rights. There are 22 rounds in the F1 season, each with at least three days of extended TV coverage. That provides thousands of top-rating commercial hours to be sold at premium prices into just about every broadcast market in the world.

By contrast, Sail GP now offers no more than 8 days of sailing with each race taking around 20 minutes yielding a total series air-time of just 16 hours. Viewer interest beyond the host cities is minimal. Little wonder the television rights fees (if any) would be lucky to even cover the cost of the coverage SailGP provides.

It is difficult to see how Larry’s folly can survive beyond this year in the face of those numbers. He has impressively deep pockets, but nobody’s fortune, generosity or ego is infinite. In any case, the eyes of the sailing world may soon be elsewhere – on the foiling America’s Cup monomarans.