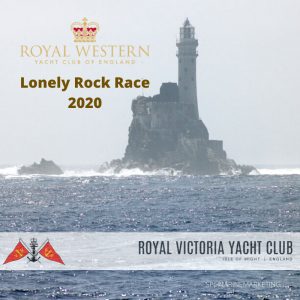 They do say that one door closes often another door opens.

After the Royal Ocean Racing Club (RORC) based in London decided on the, to some, the controversial change to the Fastnet Race to finish, not in its traditional port of Plymouth, Home of the Royal Western yacht Club (RWYC), a tradition established in 1925, just 6 years short of a century ago, when it is said it was originally the result of a bet between two RWYC members.

The ‘Fastnet has run every 2nd year in odd years (barring the War Years), and last year attracting 300 entries within 5 minutes of the registration opening but from 2021 it will finish across the channel in France. The actual port isn’t important as the move effectively closed future improvements on the course record, wherever it is and ended the use of the traditional course. Door Closed!

Naturally the Royal Western Yacht Club which had hosted the finishers for all that time now had a gap in their sailing calendar, not to mention what I would imagine was a significant dip in their biennial bar and hospitality income whether the sailors were just able to walk up the pontoon or had to catch a ferry or bus to join the festivities – clearly that didn’t put off the entrants in 2019.

Enter the “Lonely Rock Race” which at first glance is a fanciful title until you understand that “Lonely Rock” is a loose translation of the Gaelic name for this hunk of rock not far south of the Irish Coast.

So as not to conflict with the other, now new race, from the Solent, round the rock and finishing in France, the race will be run in even years on the traditional course leaving Scillies and Bishop Rock to the north, starting in the Solent and finishing in Plymouth and open to boats from 30-60 feet.

The starting end of the regatta will be handled by the Royal Victoria Yacht Club based in Ryde n the Isle of Wight. One of the island’s smaller clubs and having taken a look at their web site it appears to be ‘my kind of club’.

It will be interesting to see which race attracts the greater numbers of entries but either way we now have, not one, but two, classic 600 mile races along the English Channel and out into the notorious Western Approaches.

Had to happen really and I would not be surprised if many owners simply enter both and UK offshore sailing can surely only benefit from such an opportunity becoming annual rather than just every other year.

Here’s wishing success to both events.

they hike so the owner doesn’t have to