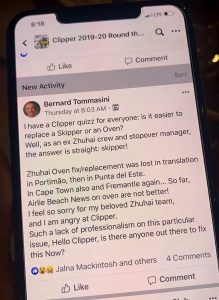 was about to depart Australia en route to Sanya, China – their home port, likely the first thing they would have needed on arrival is a cold beer or three. You might ask why this would be any different from any sailor after a long offshore race.

Well, the watermaker on the boat didn’t function and the boat was to take water in containers with a budget of around 1 litre per day but some crew members were (rightly) not happy. They are paying for the experience after all.

As the whole voyage would have been in tropical or equatorial conditions some of the crew complained to Clipper. This drew a response from Sir Robin Knox Johnson (from the Clipper website)  “Most ocean sailors know how to ration their water supply, we used to have to before the invention of watermakers. I averaged 1 litre a day for 312 days, but understand that that these days people expect more. But how much more? It is easy to overload the boats. We have used water containers before when a watermaker failed, Mark Light was Skipper of that boat and knows this from experience what is really necessary. So we need to look at what is necessary for sensible usage on the next race to Sanya and not excessive.”

While most would agree that unnecessary weight would be “excessive” it needs to be remembered that the 312 days of Sir Robin’s amazing voyage were not all topical or equatorial conditions and he was not a paying customer with the ramifications that brings. And why set off on a voyage with rationing in force from the very start? That’s surely not seamanlike!

Understanding of the human body’s requirements have moved on and no lesser a health authority that The National Academies of Sciences, Engineering and Medicine state that the recommended daily intake of water (of which 20% is from food) is around 3.7l/day for males and 2.7l/day for females in a temperate climate, so the idea of 1 litre a day in  warmer climes doesn’t really match up. So those “people who expect more” include the medical professionals.

Thankfully Clipper have realised the potential longer term risks of continued dehydration and delayed the start to allow the watermakers to have the spare parts fitted and working with a 48 (ish) hour delay on the start from Airlie Beach. Clipper lay the blame for the delay in the parts on TNT for missing connections along the way

Not the first time on this lap of the globe that Clipper have been slow to look after their paying customers relative comforts with Zhuhai Clipper needing work/replacement on their oven in Portimao, still waiting in Punta Del Este, Capetown, Freemantle and apparently still without a solution in Airlie Beach. I know some people who are angry about that. Me? I am just reporting the facts.

this is a club you'd love to be a member of

how’s that for a sight?