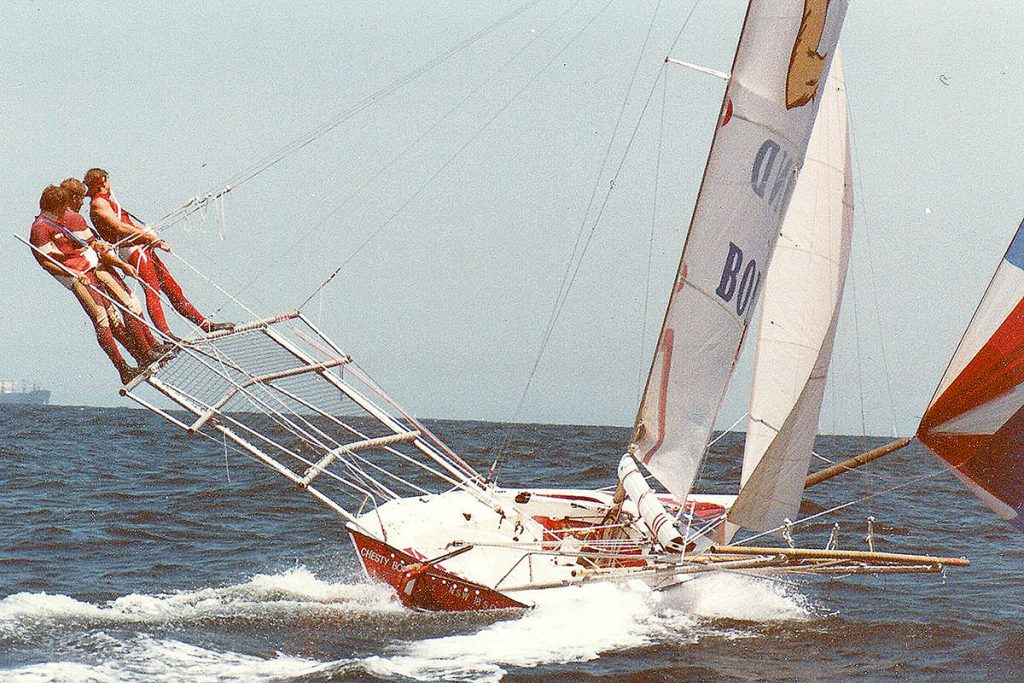 When the Australian 18 Footers League’s 2019-2020 Season resumes racing on Sunday, January 12, it will be 35 years since the club celebrated its 50th Anniversary in January 1985 by staging a unique event, which produced, as it’s finale, one of the most spectacular 18ft Skiff races in the sport’s more than 125-year history.

There were seven races in the event. The first six races were sailed over specially designed courses on Sydney Harbour. Prizemoney for the top six placegetters in those races was $5,500.

The final race, The Ocean Challenge, was undoubtedly the highlight of the series.

With $2,000 prizemoney up-for-grabs, 19 boats lined up for the Le Mans-style start on the Pittwater side of Palm Beach.

Skippers had to run to their boats, which were being held ready by the other two crew members, sail around the Palm Beach headland, go to sea, then head south along the shoreline to the ‘Heads’ at the opening to Sydney Harbour.

Once inside the harbour, the 18s had to race to the finish line, which was positioned east of the Sydney Opera House.

It was the first ocean-going 18ft Skiff race ever staged and came with all the fanfare expected from such a unique contest.

Sponsored by the NSW Government’s State Bank of New South Wales, the start followed a spectacular air display over the waters at Palm Beach. Local television covered the festivities with pre-race interviews, helicopter coverage as the skiffs raced down the coast, over the 26-mile course, and down Sydney Harbour to the finish line.

All that was needed to make the day a total success was a perfect North-East wind to push the skiffs down the coast at top speed.

When the starter sent the fleet away, the organisers’ prayers were answered as the breeze was 15-18 knots from the North-East.

Bradmill, Chesty Bond and Tia Maria were the three top skiffs of that season. Along with Anthony Scali’s Nick Scali Furniture, they were the leaders as the fleet cleared Barrenjoey headland, set their spinnakers and headed south towards Sydney Harbour.

Once clear of the headland, Bradmill stayed close to the shore, Chesty Bond was further away from the shore, and Tia Maria was even further out to sea.

According to Chesty Bond’s skipper, Trevor Barnabas, “We had our #3 rig on while Tia Maria had her bigger #2 rig.”

“Our tactics were to set the spinnaker as soon as we cleared the Barrenjoey headland. Tia Maria, with the larger rig, headed out to sea before setting a wire luff spinnaker.”

Little separated this leading group before Bradmill broke her rudder off Collaroy, leaving Chesty Bond and Tia Maria to vie for the lead.

Because she was closer to the shore, Chesty Bond’s crew had some anxious moments in the unfamiliar waters.

Barnabas says, “We didn’t know the depth, or if there were rocks, or shallows that stuck out, and at one stage we weren’t confident about clearing Long Reef.”

“Fortunately, the breeze eased slightly and, keeping the boat heeled, we were able to clear it. We all breathed a sigh of relief once we could see the bottom under us.” “Despite the nerves off Long Reef, it was the most thrilling ride of my life.”

“Experienced yachting identity, Bill Buckle told us later that he estimated our average speed on the 26ft wide wings was around 20 knots.” Despite the speed of the ride, there was still another hurdle for the Chesty Bond team to overcome.

Once again, Barnabas and his team were concerned. “We weren’t going to clear North Head, but as we approached it, the breeze lightened a little and again we managed to be able to clear the cliffs.”

A large group of spectator craft was waiting for the fleet to arrive at the Heads into Sydney Harbour, and they weren’t disappointed when Tia Maria and Chesty Bond arrived with just a couple of boat-lengths separating them.

The NE wind meant that it was going to be a spinnaker run down the harbour, but both teams would have to gybe several times in a match race-style battle to get the victory.

Tia Maria’s team dropped the wire luff spinnaker and changed to the normal #2 spinnaker for the harbour run.

As the two skiffs met, Tia Maria held a two boatlengths lead over Chesty Bond. Tia Maria, with her #2 rig, had the bigger sails, which was the correct rig for the spinnsker run down the harbour to the finish line just east of the Sydney Opera House. Barnabas recalls, “Tia Maria was the first to gybe to enter the harbour. We chose to stay on our course a bit longer because the breeze was lighter under North Head.”

“When we gybed, we had made a gain and were now in front of Tia Maria as we prepared for the run to the finish.” “We knew Peter Sorensen didn’t like being covered so, when we approached the first cross, we gybed in front of him. His only was past us was to windward, which he couldn’t do because we luffed him.”

Despite the sail area disadvantage, the Chesty Bond crew were able to stay between Tia Maria and the finish line as the two skiffs raced almost side-by-side down the entire length of the harbour – from the Heads to the Sydney Opera House.

Barnabas added, “Phil (sheet hand) and Adam (bow) sailed faultlessly, and together we were able to gybe and pick the shifts to stay ahead of Tia Maria all the way down the harbour to the finish line, where it was barely 8-10 knots.”

Asked how the Chesty Bond team managed to hold off Tia Maria in the light air near the finish line, Barnabas said, “Both boats were on starboard tacks and still needed to gybe twice to cross the finish line.”

“When Tia Maria gybed, we decided not to gybe in front of her as we thought we would get rolled in the light breeze.” “We kept on the starboard tack then gybed onto port so the final gybe would be closer to the finish line. We were able to complete our final gybe and crossed the finish line just ahead of Tia Maria.”