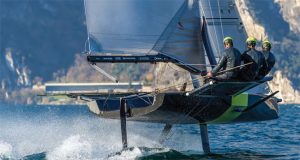 The thrill of foiling above the sea under sail need not be limited to America’s Cup or Open 60 boats sailed by professionals. One perfect example of this “foiling for everyone” is the 69F concept developed by the yacht designers Wilson Marquinez (MW Naval Architecture, Buenos Aires), with the initial idea going back to 2016: a foiling monohull sportsboat that should be as simple as possible so that it can be enjoyed by a wide spectrum of sailors; young or old, advanced or beginners.

These ideas were discussed with Luca Dede from One Sails and pro yachtsman Maciel Cichetti. The emphasis was on safety and slow “take-off” speed, so that this boat can foil even at low true wind speeds. What they created was a performance design using the latest technology for a monohull one-design class with a sleek hull that already sails fast in conventional mode, without foils. Read on.

m is for monster deal