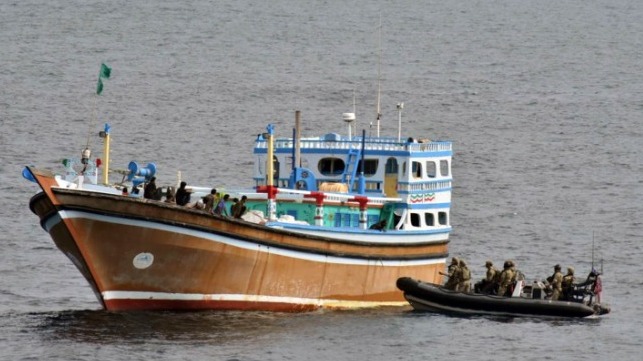 Just days before Christmas, the crew of the Royal Navy destroyer HMS Defender intercepted a suspicious dhow in the northern Arabian Sea and seized $4.3 million worth of methamphetamine.

The discovery came thanks to the alertness of Defender’s helicopter crew during a dawn patrol over the northern Arabian Sea. The Wildcat crew located a solo dhow not flying any flag or showing any evidence that it was involved in fishing.

That prompted the destroyer to investigate, sending Royal Marines across in sea boats to secure the dhow and its crew. Royal Navy sailors  conducted a thorough search of the vessel while the Wildcat hovered overhead to provide protection.

The sailors located 11 mail-bag-sized sacks, some weighing up to 15-20 kilograms and suspected of containing crystal methamphetamine. The total haul came to more than 130 kilos.