if it ain’t broke… 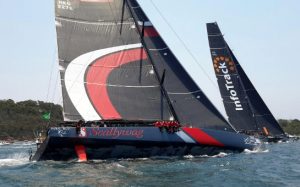 The two supermaxis that have apparently had the fewest nip-and-tuck alterations this year have put in strong showings in the first few hours of the Sydney-Hobart race.

InfoTrack (the Juan-K 100 footer launched as Speedboat back in 2008) nailed the start in a sparkling 12-knot north east breeze and led the fleet around the clearance mark by almost two minutes. This was the third time she’s been first out the Sydney Heads, having managed the feat in 2015 and 2016 when named Investec Loyal.

For spectators, the major early interest was in the battle up the harbor between Wild Oats XI and Scallywag. The two skippers – Mark Richards and Dave Witt – are not exactly drinking buddies. Witt got the early jump but was caught in a close port-and-starboard by WOXI on the Western shore. Scallywag was forced to tack away and surrender their advantage.

The surprise in the first few minutes was that Black Jack, with all her recent mods, found it difficult to match the others for straight-line speed. Comanche made a mess of their start and was the last supermaxi out of the harbor.

But once the fleet turned South, eased sheets and set their assys on a comfortable three-quarter, Comanche soon dominated. The boat runs and runs. At time of writing she has a clear lead (although slightly to windward of the rhumb line) with the other 100-footers bunched five miles behind. See where they are now.