attack of the dicks 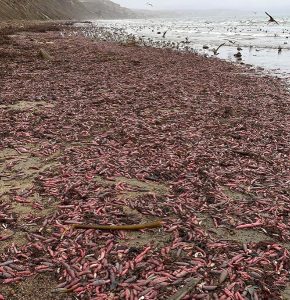 No, not a World Sailing meeting because as we all know, those guys don’t have dicks…

After a powerful storm washed away their cover, thousands of unsightly — and phallic-looking — worms were left bare on a California beach.

First reported by nature publication Bay Nature, the “penis fish” that washed ashore is the Urechis caupo, a type of spoonworm that primarily lives on the Pacific coast from southern Oregon to Baja California, according to naturalist Ivan Parr. At around 10 inches, its peculiar shape is perfect for coastal life, allowing it to dig a U-shaped burrow for itself and for other sea creatures, like crabs and fish, in sand or mudflat, he said. Read on, courtesy of USA Today.