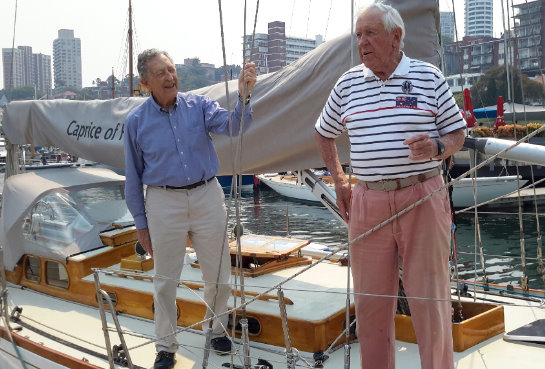 A fifty-year sailing rivalry will resume this weekend when two of the most famous names in Australian yachting go head-to-head again in a special regatta to mark the 75th anniversary of the Sydney-Hobart race.

Sir James Hardy (87) and Gordon Ingate (93) will each skipper their own classic yachts in a two-day event that features an extraordinary 36-strong fleet of pre-1975 veterans of the great race South. Hardy’s cutter Nerida won the Sydney-Hobart in 1950 and Ingate’s little sloop Jasnar came eighth the same year.

Sir James is best known internationally for his World Championship in the 505 dinghy class and helming three of Australia’s challengers for the America’s Cup. Ingate skippered Caprice of Huon to win the first three races of the 1965 Admiral’s Cup series and is a multiple champion in the three-man Dragon class.

Hardy entertained the yachting media who gathered at the Cruising Yacht Club in Sydney with his gentle insights from a long career racing offshore. “The main difference today is speed”, he said, “but the camaraderie with the crew is the same”.

When asked for the key to winning boat races Ingate was blunt: “Get the best crew you can, and hope they make up for your mistakes.”

Questioned whether these two old salts were still rivals, Hardy quipped, “Of course we are – but not off the water!”

Entrants for the classics regatta include five previous Sydney-Hobart winners and three line-honours champions. Two boats that competed in the first race in 1945 will also take part. The oldest yacht racing, Katwinchar, was built in a London brewery in 1904 and sailed out from the UK to contest the race in 1951.