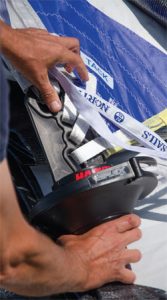 The ability to furl sails has been something we’ve taken for granted for at least 40 years. In fact, the influence of furling has been so widespread that it’s easy to imagine that everything that could be achieved has already been achieved. Except now we are finding out that it hasn’t and the next step in the evolution could represent another huge step forwards for the sport as a whole once again.

For Harken, the route began with the development of their Reflex Top- Down Free-Flying Sail Furling System for downwind sails. From the start, this was a system that was aimed at the broad sailing market and intended to enable recreational racers and short-handed cruisers to furl their asymmetrical kites and code-style sails completely and reliably so that they simply used them more often. Read on.

Sailor Chick of The Week