it’s a small world after all 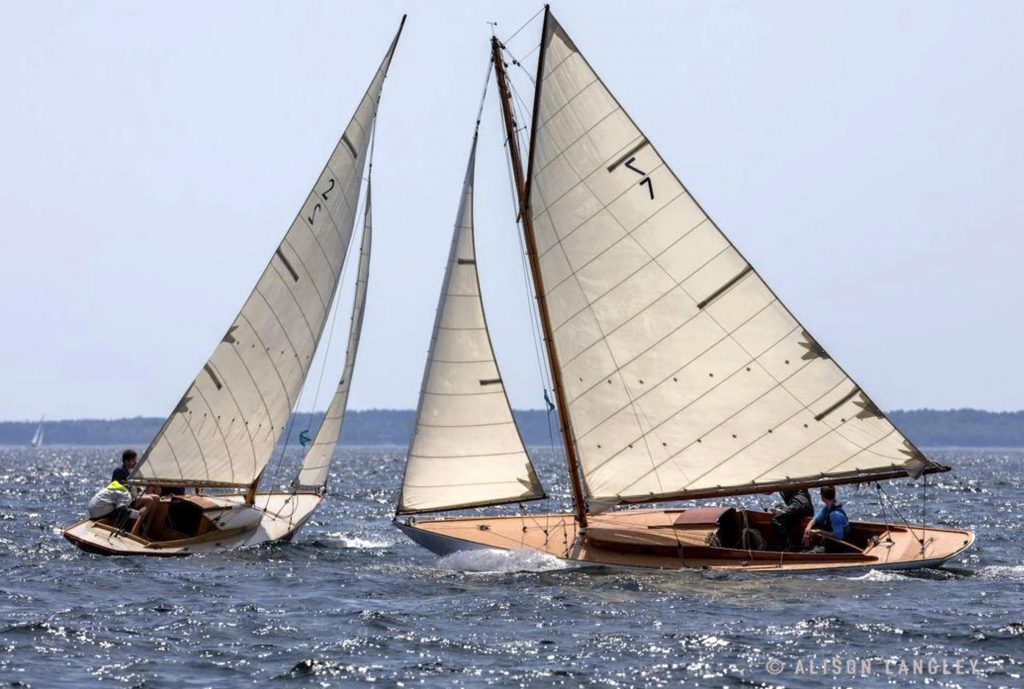 And if this elfin pearl necklace of a regatta can’t warm your cold winter’s heart, what will?

Artisan Boatworks was proud to both sponsor and compete in this year’s Camden Classics Cup regatta that was held on July 26 and 27. Racing was held under bright blue skies, in building 12- to 25-knots of breeze in the lovely and lumpy waters of the western Penobscot Bay.

And though nobody planned it this way, Artisan Boatworks built 4 out of the 9 total entries in the Daysailer Division – a division that sailed alongside 75 total entrants. The other divisions featured period schooners, classic vintage yachts, several cutting-edge Spirit-of-Tradition designs, some Modern Classic split keelers and even a group of contemporary J-46s.

And even though all those boats were lovely in their own rights, nobody could deny that in terms of style points, we daysailers were second to none. 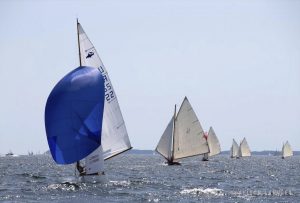 “The Daysailer Division featured two distinct types of traditional sailboats – the sleek gaff-rigged day-racers from the early 20th century, with familiar designer names like Herreshoff and Crowninshield, and then the wholesome small knockabout mid-century cruisers, like the Dolphin 24 and the Bridges Point 24,” explained Robert Stephens, partner at Stephens Waring Yacht Design, in Belfast, Maine, who has studied and iterated these classic daysailers since he was a child.

Two of my favorite Herreshoff designs that Artisan Boatworks also happened to have built shaped up at the start: A lovely Buzzards Bay 18 named BESHERTE, and a Watch Hill 15 christened JEANNE, that I raced on. Both are worthy of a deeper design explanation.

What Makes a Camden Classic Daysailor.

The Buzzards Bay 18 was drawn back in 1903 by Nathanial G. Herreshoff, for the choppy and windy waters off Cape Cod. And though no original hull of this model survives, Artisan Boatworks crafted her back in 2013 out of edge-glued cedar over an oak and mahogany frame. The original featured a flat-bottomed so-called “skimming dish” hull that relied on a centerboard for its righting moment. But Artisan swapped in a full keel and added a modern carbon fiber rig to give BESHERTE the heft and sailing punch to stand up to heavier air with no backstays.

The Watch Hill 15 evolved a bit later. She originated from the genus of slim, ultra-weatherly day racers that

Nathanael G. Herreshoff drew starting at the end of the 19th Century. But it was Herreshoff’s eldest son, A. Sydney Dewolf Herreshoff, that drew The Watch Hill 15 in 1923. Modern versions of this flatwater speedster are still built from composites and metals, and raced at the Watch Hill Yacht Club in Rhode Island to this day. But, Artisan Boatworks was careful to craft JEANNE out of more traditional materials in 2011, for pure speed. She’ll glide silently along, in even the lightest airs.

The Daysailer Division was further rounded out buy three Dark Harbor 17-1/2s, named FROLIC, PHOENIX and TIGER respectively, two of which Artisan Boatworks also built. The Dark Harbor 17-1/2s were drawn by Bowdoin Bradlee Crowninshield, the often-overlooked yacht designer from yachting’s Golden Age, in the early 1900s. Crowninshield was a lot like his boats: Sleek, elegant, but utterly unafraid to mix it up in close quarters. This Harvard grad, who came from a well-to-do family, was sued for $10,000 for punching out the yachting editor of The Boston Herald. Who hasn’t secretly yearned to do the exact same thing?

Two Dolphin 24s, DOLPHIN and MARIONETTE, also competed in this year’s Camden Classics. This Sparkman & Stephens design was a ground-breaking junior offshore racer from the late 1950s. Hundreds of these trim centerboarders were carefully built, out of both fiberglass and wood, by several builders. And archives of Dolphin 24 stories are filled with marvelous David vs. Goliath yarns and the heartbreak of watching one’s Dolphin disappear down the driveway, when it came time to sell. 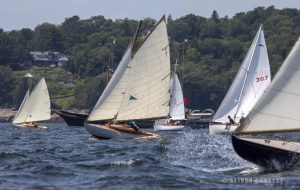 The daysailing division was rounded out with a crowd favorite pocket racer/cruiser: A Bridges Point 24 named SUNNY DAY. She was drawn in 1984, by Brooklin, Maine’s own Joel White. And finally there was the lithe and  mysterious dayracer named MAKO, an example of a fascinating 21-foot Finnish racing class called a Haj. This weatherly, razor-thin 3,200 pounder turned out to be devilishly effective on the Maine race course. She was built by a Finnish builder, Jakobstads Båtvarv – a yard that has been crafting wooden boats since 1904.

All nine classic boats in the Daysailer Division tacked, gybed and tuned our rigs during a nearly hour-long starting sequence that sent off the eight other larger-boat divisions into the building Sou’westerly breeze and hazy Jamie Wyeth stratocumulus sky.

Winning On A Big Stage for Little Boats.

To me, as a competitor, the 2019 edition of the Camden Classics was dominated not by the other big boats, but by the seriously big Committee Boat. Race organizers secured the absolutely stunning 122-foot ATLANTIDE to mark the flag end of the starting line. This Alfred Mylne designed, ultra-luxury motor yacht was built in the 1930s, but restored at Front Street Shipyard in Belfast in 2012. She saw active duty in WWII, as part of the private Little Ships fleet that evacuated English troops trapped on the beach in Dunkirk, France.

But, as lovely as I found ATLANTIDE, this massive obstruction utterly dominated the starting area for the smaller boats. She was the single largest object on the course! So large that she projected a serious leeward calm spot at the critical flag end of the line.

To compensate, the race committee wisely protected this one-of-a-kind vessel with an additional offset inflatable buoy, set another 100 feet or so beyond ATLANTIDE’s transom. This offset mark certainly protected her stern from the bigger boats jockeying for position at the start. But for us, on JEANNE, this offset mark created a tactically fascinating windward beat to the flag end of the starting line.

Clearly, the Race Committee knew a division of wise guys when it saw one. So, to make sure there would be no little boats fooling around near big old ATLANTIDE at the flag end of the line, the pin was additionally biased to give it significant windward advantage. Factor in that the starting line was several hundred yards long to accommodate the bigger boats, winning the pin was key to racing success.

And all the racers knew it.

“With a course this unique there were two places we had to win,” said Josh Goldberg, skipper of the Buzzards Bay 18 BESHERTE. “The start and the final beat to weather. We got a good position on the pin end and relied on our timing to win that mark.”

Sure enough, Goldberg channeled his inner Harold Sterling Vanderbuilt, and set up for an utterly undisguised, single tack timed-approach on port to find the pin end. And even though a half-dozen other boats, including mine, saw Goldberg’s blatant attempt to port tack the fleet, and challenged him for the pin over both days of racing, BESHERTE out-timed all and reached the mark in the clear, at the gun, and got away left covering most of the fleet in the process. 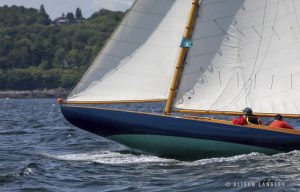 On the first day of racing, we watched as the burly gaff-rigged BESHERTE easily carried her lead all the way up to the windward mark, then down the long run and back up the single beat to the finish. She was followed over the line by the Dark Harbors FROLIC and TIGER, my team on the Watch Hill 15 JEANNE, and then the remaining Dolphins, the other Dark Harbor, the Haj and the Bridges Point. The second day of racing, however, held some interesting twists on the favored pin-end start.

Initially, we watched as BESHERTE found a clear lane on port, at the pin end of the line. But on this day, when she steamed off right, it turned out she was not clear ahead. The Finnish-built MAKO, took a more conservative mid-line start, but was still able to outwork BESHERTE to weather. When MAKO found fresh pressure and a favorable lift, she snuck ahead of Besherte and got to weather layline first. MAKO fetched the huge sea gong that guarded the aptly named ledge, The Graves. And flashed some nice crew work by setting an azure blue spinnaker without incident, even in the building breeze.

By the time we on JEANNE rounded the weather mark, BESHERTE and MAKO were well down the course. And though the gaff rigger threatened to cover MAKO with her massive 472 square-foot plan, MAKO sailed lower and faster under her more modern spinnaker. She rounded the leeward mark ahead and covered for the rest of the race, to take the winning bullet. Nice work, MAKO!

Challenging Conditions to Be Smaller.

Overall, I found the rising winds and seas made for challenging and memorable sailing for us in the smaller boat fleet. Both days put a premium on seamanship over electronics and technology. Reefs were tied in by hand. Head sails often had to be rescued from the water during gusts. There were always close roundings at marks, and many exciting port/starboard crossings.

In all, there were no collisions, minimal damage and nothing but good cheer from all. We nine boats happily made it back to lovely Camden Harbor ahead of even the biggest boats. That left time for laps around the bay. On JEANNE we took naps.

Eventually results were posted. But, I find it hard to believe that there were any real losers in racing this fun. 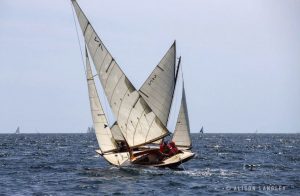 If this kind of smaller classic boat racing sounds like your cup of sailing tea – and I hope you think it does – do like I did, and give Alec Brainerd a shout. I managed to arrange for a charter of JEANNE in about a week prior to the regatta. And many great classic boats are within easy reach: Both BESHERTE and JEANNE are available for hire or outright sale. And any classic sailor will be happy to steer you to the resources you need to compete.

One thing is for sure, I know I will be back in the Camden Classics Cup in 2020. Why not join us?
–Jonathan Blum

masters of the mistral