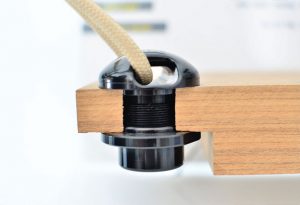 ‘For Us, By Us’ could easily have been the tagline that Julien Barnet – a professional sailor and rigger – and Thibault Reinhart – pro sailor and certified naval engineer – came up with when, in 2013, the two Frenchmen formed their new company Ino-Rope.

The pair first met in an Italian boatyard while working on separate Mini Transat 650 projects and quickly became firm friends. They launched Ino-Rope to satisfy an unfulfilled demand among the offshore racing community for light, strong and reliable turning blocks and shackles.

Over the next year the duo came up with an innovative solution using high-tech textile fibres to produce the first block using a rope – rather than ball-bearing – axle. It took two years of painstaking testing and product development before they went into production with blocks in a range of sizes, but since then Ino-Rope has continued on an arc of logical and well-considered product releases. Read on.