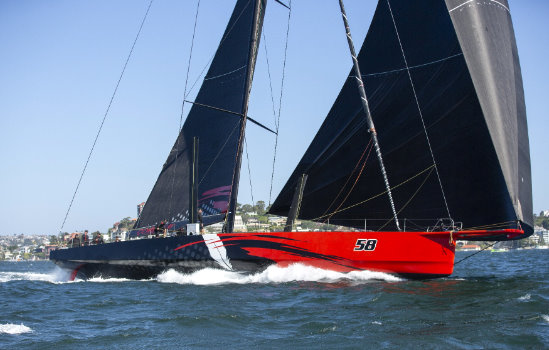 With just 30 days to go before the start of the Sydney-Hobart race the pro crews are blowing the dust of their 100-foot supermaxis and getting ready for the last major offshore event in the world that takes these ageing behemoths seriously.

Wild Oats XI is still in the shed undergoing deck and rig repairs after her shock mast failure in the Cabbage Tree Island race three weeks ago. Scallywag (previously Ragamuffin 100) has been shipped back from Asia but is yet to step her mast. InfoTrack (the former Speedboat) is alongside and set to go. Black Jack has been in race trim for some time, testing out her new nose-and-tail job and front canard. Comanche – the fastest time record-holder – is apparently unmodified, ready to race (and reputedly for sale).

Those are the ‘Fabulous Five’. As usual, they will dominate media coverage and therefore public attention. To their credit the organizing authority, the Cruising Yacht Club of Australia, tries to share that attention around the whole fleet, but the 628nm sprint for line honours is what grabs everyone’s eyeballs.

There were nine video crews and 20 yachting writers at today’s launch event in Sydney – but no surprises. Much of the questioning was about the damage to Wild Oats XI. Iain Murray, the boat’s long-serving tactician, confirmed that the mast failure below deck happened after WOXI had “ploughed into a wave” at 32 knots. The new lower mast section arrives in Australia tomorrow while half the rigging is being repaired in Spain and the other half is manufactured in Asia. They are hoping to have the yacht back together in time for the Big Boat Challenge on December 10.

While the supermaxis make headlines, the real competition for the overall prize is likely to be among the 12-strong ‘fleet within a fleet’ of TP52s. These rocket-ships have become so optimized – and quick – that they are likely to dominate the handicap podiums in all but the most extreme conditions. The ones to watch include Celestial, Ichi Ban and Gweilo.

“TP52s are the best all-round performers for this race”, said Naval Group skipper Sean Langman. His response to their challenge has been to ‘re-mode’ his 70-footer by adding water ballast, a longer bowsprit and moving the keel bulb. “My competitive instincts have taken over somewhat”, said the 29-Sydney Hobart veteran.

This year marks the 75th anniversary of the Sydney-Hobart and that landmark has attracted more than 160 entries – double the fleet size of the previous few years.

There will be a unique, two-day lead-up regatta for pre-1975-built race veterans on the weekend of December 7 and 8.  Among the more than 30 starters listed are five previous handicap winners – Nerida, Struen Marie, Solveig, Anitra V and Love & War – plus classic line-honours champs Fidelis and Kialoa II.

But the sentimental favourite will be Wayfarer, which competed in the first race to Hobart back in 1945 and still holds the record for the slowest elapsed time – 11 days and 6 hours. That’s just a tiny bit longer than Comanche’s current record of 1 day, 19 hours. (Mind you, the Wayfarer boys had to stop a few times to sew up their ripped sails, and went ashore at one island for a spot of rabbit shooting.)

Title inspiration thanks to Skooly D