When was the last time there was a lead like this?: 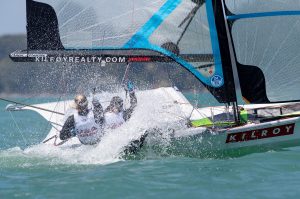 The USA 49er and 49erFX skiff teams blitzed day one of the Hyundai 49er, 49erFX and Nacra 17 Oceania Championship, the women’s pairing of Stephanie Robel and Maggie Shea posting an ominous low score, thanks to two wins and a third, to lead the fleet and Rio 2016 gold medallists Martine Grael and Kahena Kunze of Brazil by 7 points.

On their opening performance Roble said, “It was 10-15 knots and as the day went on the current started building from the north, and that made it choppy and tricky all-round. We really focused on good start execution, keeping eyes forward looking at what pressure was coming down the course and trying to sail big lanes upwind, to let it rip and get to the pressure. We are excited about how we sailed.”

The talented FX duo spent a couple of weeks learning the course areas at the beginning of the month and the first day of the Oceanias, Monday November 26, was also their first day back on the water after that intensive training block.

“When we were last here we learned a good bit about the current and just tried to spend time getting familiar with the race courses. I think it’s a pretty unique venue with all the land, so it’s hard to make ‘rules’ for different courses,” Roble admitted.  More.