you say you want a revolution? 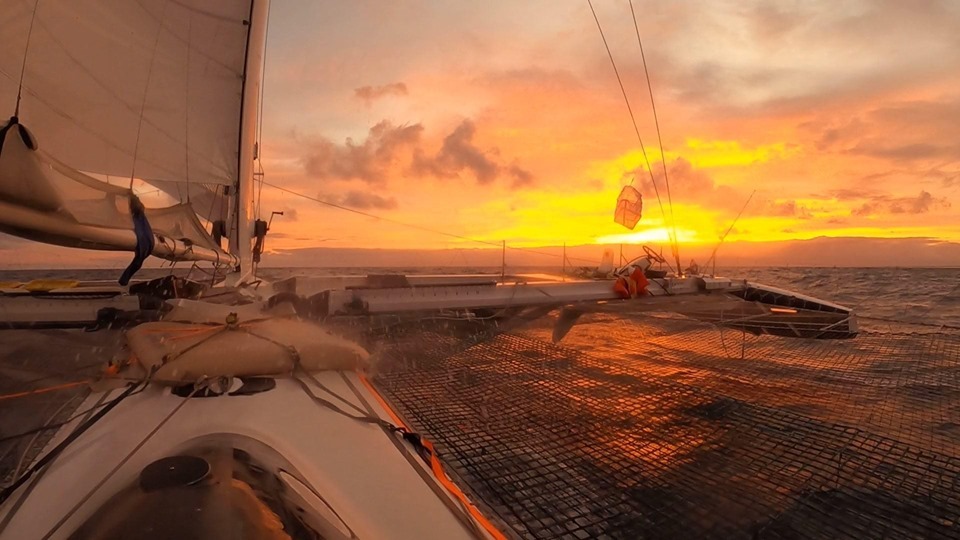 If you’ve been following the major French offshore races as of late, and some of the related social media feeds, then you may have seen cryptic snippets here and there that the world famous l’Hydroptere has recently been sailed back to her former home of San Francisco Bay. Having lived in Honolulu the past three years and just been back home for Transpac this summer, I was as surprised as anyone to learn that l’Hydroptere would ever set sail again, let alone complete an ambitious trans-Pacific crossing in the autumn.

Last time that I had laid eyes on the boat, it was dying a sad, slow death in Honolulu’s Keehi Lagoon. Tied up to a $50 a month state mooring, one had to pass derelict boats, a pair of mostly-submerged rigs from a sunken ketch nearby and some rather unsavory individuals just to reach the famous French boat that helped ignite the foiling revolution that has changed the sailing world as we know it. Her inauspicious surroundings seemingly foreshadowed the next inevitable step that l’Hydroptere would take in her long, drawn out journey to the grave.

After her unsuccessful outright Transpac record attempt in 2015, l’Hydroptere was left high and dry in Hawaii. Located 2,000 miles downwind of California, a lot of boats tend to get sailed here and forgotten about and l’Hydroptere was no different. Chained to a dock in nearby Kewalo Basin for a prolonged time before being sent to die in Keehi, l’Hydroptere had fallen victim to the worst raping, pillaging and plundering that Hawaii’s meth-fueled harbor pirates could throw it’s way. “In it’s worst state, it was in very poor shape. The coffee grinders, clutches and winches had all been stripped”, l’Hydroptere delivery skipper Mike Price relates. “The steering system, which was hydraulic, was ripped apart on one side, but once they realized that they couldn’t use the parts from it, it was left intact on the other side.

They bashed in the entry hatch and stole the chart plotter, GPS and electronics. They left in place most of the hydraulics for the flight control systems but the sails were taken off as well”, Price adds. “But structurally, the boat was very well intact. The hull was built quite a long time ago, and it was characteristically over built out of carbon. The hull is really thick carbon, something like twice as thick as most modern carbon ocean racers. There were no breaks or cracks in the laminate or between structures. The boat being made completely of carbon and titanium, everything seemed very structurally sound. The rig and standing rigging looked fine”.

Once the boat had been purchased by it’s new owners, it was re-fit locally, just good enough to get her home to San Francisco where she will undergo a full re-fit, restoration and modernization. “The local crew installed a new Lombardini inboard diesel; super small and compact. Sourcing delivery sails, deck gear and hardware, new back stays and a lot of new lashings for sail controls and rigging, she actually looked pretty good and I was fully confident in the boat to go blue water sailing”, says Price. 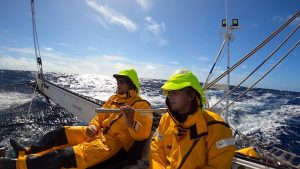 Leaving Hawaii in a large area of high-pressure and light air between two autumn storm systems, l’Hydroptere motored north of the islands for nearly six days before reaching the breeze. “We sailed three-up because of the lack of living space. The main hull is only 4 feet wide, so there’s really limited space and a small crew maximized what space there was.

The ama’s are small, but it was amazing how wave piercing and buoyant they were. The boat doesn’t want to stop for anything, it would just shoot through the waves with white water everywhere. We sailed the boat extremely conservatively with very undersized delivery sails, and she still wanted to sail around in the mid-teens in a lot of conditions. In anything over 10 knots, the boat was pretty much going windspeed, where as over 12-14 knots we could just drop the main and cruise jib only doing 10’s.”

The only goal was to get the boat home safely, not to set any speed records. “We removed and disabled all the flight control stuff for the delivery. We de-cambered the foils and disabled the flaps on the rudders to keep the boat firmly in the water, in non-foiling mode. The boat is science-fiction, man, it’s super cool. Everything on the boat works a lot more like an airplane than a modern America’s Cup boat, in regards to the adjustment of the foils and the flight control stuff. We had a good trip, but it wasn’t all smooth sailing. With a one-off boat that is quite fragile, it took a lot of effort to keep the boat in one piece. We constantly had to survey our gear, replace lashings, fix broken shackles and jury-rig electronics. At some point, every single piece of electronics got wet and wasn’t working. It became a constant effort just to keep our lifeline – the Iridium – fully charged.”

Now back in San Francisco Bay, l’Hydroptere is docked in Point Richmond where she will undergo a full re-fit, restoration and modernization for about a year before she is re-patriated back to her home country of France, where she remains an icon to this day. Her new French and American owners have multiple other boats and aren’t afraid of a project. Consulting and working with the original designers, there is even talk of a couple of potential record attempts. Rescued from near certain death, one of the sailing world’s most famous boats is now back on it’s way back to greatness. While this story certainly isn’t over, it now appears that it may at least get a happy ending.

Many mahalos to our boy Mike Price of Ullman Sails Honolulu – a hell of a nice guy and one of the top pro sailors and sailmakers in the Aloha State – for the exclusive interview and for helping get l’Hydroptere home. – Ronnie Simpson.