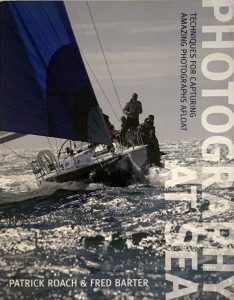 Ever since I got my first SLR as a teenager (don’t get excited, it was a Single Lens Reflex not a Self Loading Rifle) a humble Zenit B which didn’t even have a built in light meter I have had a love for photography which at times rivalled my passion for our sport. Now over dozen camera’s later, chemical and now digital I’m still learning and developing.

Along the way I have been fortunate to drive for some of the top photographers in the game with the likes of Ian Roman  and Paul Todd having me charge round a race course with one of my favourites being the gymnastic dismount by Camper’s Jumper as she left Sanya, two Volvos ago.

I have to say my favourite Lensman is Rick Tomlinson and anyone who has seen that now iconic shot of Rothmans looking like a submarine has to marvel at his shot making ability or the one of the International 14 airborne except for the bottom half of its board and rudder. The story goes that Rick’s RIB flew off the same wave ending up with Rick and cameras in the water but he still saved the shot.

Why the pre-amble? Well many say that photography is like sailing in that you cannot learn how to sail from a book. While that is probably true, you can certainly be pointed in the right direction by a well written guidebook.

“Photography At Sea” certainly falls into that category and opens with the line “The most important tools a photographer has are his eyes…..”

Written by marine photographer Patrick Roach along with Fred Barter and has been out for a while – 10 years in fact – so parts may appear a little dated but is written with the digital age in mind and a good photograph is timeless, just look at some of the shots the grandfather of the current ‘Beken of Cowes’ took.

Chapters cover everything from the basic technical features through shooting in challenging situations, lens selection, use of filters and so on.

It is not a book to pick up and read right through as by the time you get to ‘When and how to use flash’ you will likely have forgotten the piece on ‘setting the camera menu’. Better to read a bit then let it sink in, or better yet, go out and practice.

I’m sure many of us have come across the newbie sailor who is ready to do a spinnaker gybe because that was the last thing he read in his “Learn to Sail” book but has forgotten what Chapter1 told him about putting a rope round a winch.

A bit of a dry read in places but nearly as I expected given what is, after all a technical subject but peppered with advice and tips.

All that needs to be added are those ”most important tools” – your eyes!  -SS.