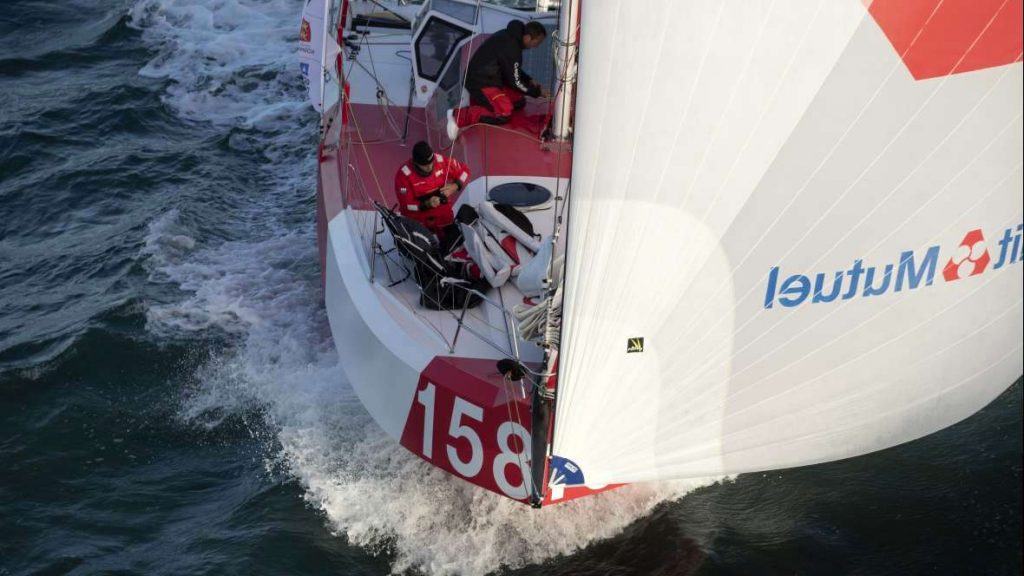 Sailing a brand-new, one-off boat that just seemed to perform better and better as the race went on and the conditions got heavier, the new Mini-inspired scow-bowed Class 40 has not only claimed victory but has decimated the class’ existing 24-hour record along the way, clocking up a gaudy 415 miles in 24 hours.

Sure, the old record was relatively soft and waiting to fall, but the new Crédit Mutuel is quite obviously the fastest Class 40 ever built and was placed in just the right hands to work her magic. Everything that Lipinski touched in the Mini Class turned to gold, and as a rookie in the Class 40’s he has picked up right where he left off, especially alongside top Figaro sailor and IMOCA veteran Hardy. 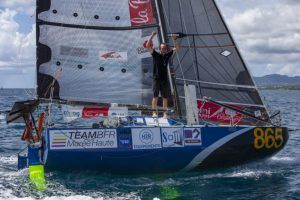 On the same day that Lipinski and Hardy closed in on a convincing victory in Brazil, 35-year old Frenchman François Jambou crossed the finish line of the Mini Transat La Boulangére in Le Marin, Martinique with more than a half-day cushion over second place on his custom scow-bow Mini; the same boat that Lipinski had sailed to victory in the race two years ago. Like Crédit Mutuel, we’ve had our eyes on the little blue prototype Mini, now named 865/ Team BFR Marée Haute Jaune since it first splashed and was campaigned in Davy Beaudart’s capable hands as Cultisol.

Other than a scow bow and a speed advantage over the fleet, these two boats had one critical thing in common: their designer. Since exploding to international prominence in 2011 with his first scow-bow Mini, the revolutionary race-winning and norm-shattering 747, the championship skipper, boat builder and designer David Raison continues to re-write the rules as his scow-bow Mini’s have now won three of the last four Mini Transats (and only narrowly missed out on the fourth due to a broken bow sprit) and have helped further the careers of multiple skippers who have sailed his boats.

The skippers who have previously piloted the distinctive scow bows of Raison were well represented with both Davy Beaudart and Giancarlo Pedote in the IMOCA class of the TJV and Lipinski at the head of the Class 40’s.

Adopting the same philosophy that almost all of the offshore classes are headed, Raison designed Crédit Mutuel to be both comfortable and easy to sail, as well as to benefit from the standout performance of an ocean-going scow bow. For more on the thought process behind the magic 415 mile over 24 hours Class 40 and back-to-back winning Mini and more, check out Tip and Shaft’s excellent interview with Raison by clicking here.  – Ronnie Simpson.