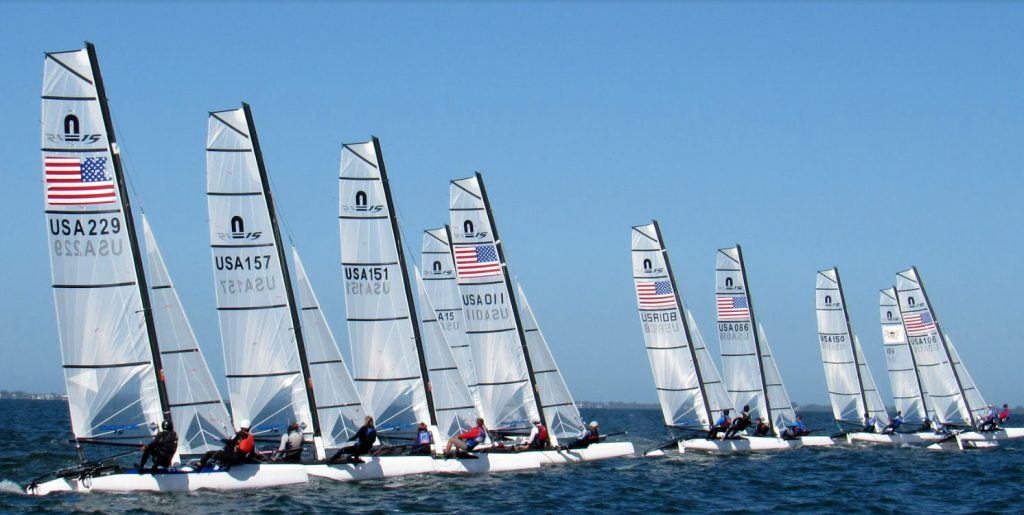 The 2019 Nacra 15 North American Championships were sailed in Sarasota, Florida with twelve teams from all across the country and would be settled in the final race of an eight race series.

Jack Sutter and Charlotte Versavel from St. Francis/Richmond Yacht Club were regatta favorites having won the US Youth World’s Qualifiers in 2018 and coming off a recent strong performance at the 80 boat Nacra 15 World Championships in France.  Leading after the first day in their favored windier conditions they remained steady throughout the regatta despite the wind settling to light and shifty at times.

J.J. Smith and Will Murray from Sarasota Youth Sailing sailed a very consistent regatta starting the regatta with two dominating wins followed by a 10th leaving no room for another poor race.  Will showed up Sunday morning with a cold and started the day with an 9th making their hopes of winning the regatta a bit unrealistic. In spite of this, in a strong effort with a 2nd and 3rd in the next two races, they finished just two points out of first.

Meanwhile, while the top two performers from day one battled it out, Matthew King and Mia Hanes also from Sarasota Youth Sailing sailed smart to keep them sneakily in the hunt. Seemingly the most in tune with the shifty conditions and consistently towards the front of the fleet through the entire event.

Luke Melvin and Marianna Shand from Alamitos Bay Yacht Club/Mission Bay Yacht Club found their stride winning the last two races in commanding fashion moving them up to fourth overall. However, with super tight scores in a regatta where no one was the clear leader, there was a battle behind them.

In the final race, at the first windward mark Jack Sutter and Charlotte Versavel rounded in fourth securing them in position for the overall win, during the last downwind found themselves in a tight of the next second boat.  At the finish this group were so tight Race Committee couldn’t even record finish times, and Jack & Charlotte found themselves in the back of the group in 8th place.

With this tight finish changing nearly every position in the regatta, Matthew King and Mia Hanes in the same fashion they sailed their entire event, sailed smartly in the last downwind leg battle take 2nd, wining the regatta on a tiebreaker.

The Nacra 15 is the Youth Official Youth Multihull of World Sailing. To qualify for the Youth World’s teams must sail with mix gender, any combination may be sailed in Nacra 15 Class events.  The next major event in the USA is the Midwinters West April 10th-12th in Long Beach, California which serves as the first US Youth World’s Team Qualifier.

keeping up with the vendees