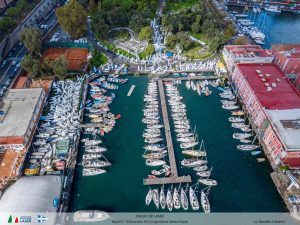 You are probably familiar by now with the huge fleets in the 4.7 and Radial at youth Laser regattas in Europe.

For the European and World championships, for both the 4.7 and the Radial, levels of attendance of some 400 sailors are regularly reached.

What is less known is that national regattas can also attract such huge fleets. The regatta that just started today in Italy is an example. This is the 2019 Italia Cup, organized in Naples, by the Molosiglio Sailing Center, on November 8-10.

Let’s have a look at the registrations: