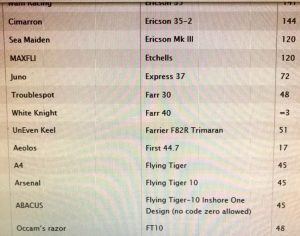 This is one of the most laughable and retarded things I’ve seen in a while:  the biggest whiner about the mighty A4 is at it again, this time adding a  a bizarre declaration to their entry for this weekend’s first Hot Rum series. Check it out in the entry for perennial second-tier Abacus by expanding the picture.

First of all, the bitch about not being able to have a code zero  does not apply to this series. There is no “One Design” PHRF rating here, all handicaps are modified from PHRF slightly by Bruce Nelson with, according to Bruce, “Past race results, ORR, ORCi, IRC, PHRF, Portsmouth Number, whatever is out there”, and he turns them into a TCF number rather than a standard format PHRF number.  Nelson knows we are carrying a zero, as I have informed him of that, and he will factor that into our final rating, which again, is not a PHRF rating or a “One Design” rating.

These are the same dopes who tried to protest our class win last year for the same thing, only to lose, again. Maybe try doing some research next time before you embarrass yourselves in front of the entire fleet. – ed.