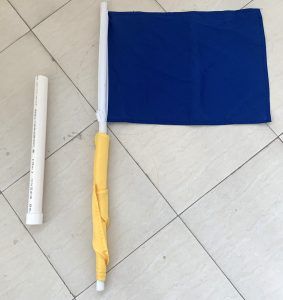 Some of the best ideas are the simplest.

For those who don’t know, in match racing the boats come in from  opposite ends of the line and are identified by flags. Blue from the port end and yellow from the starboard end.

As boats swap entry ends after each race so the flags also need to be swapped. This involved unfurling one and furling away the other.

At the recent China Club Challenge Match in Xiamen I saw a really neat (and as an extra bonus, cheap) solution .

The two flags goon the same stick which is a piece of small diameter plumbing pipe. On the back of the boat goes a slightly larger diameter plumbing pipe with an end cap on the bottom. That pipe, which is the length of the fly of the flags is then secured on the transom of every boat, cable ties, tape or some such would do the job.

So if you are entering from starboard you stuff the blue flag into the larger tube leaving the yellow showing or if blue (port entry) the yellow flag is hidden away.

To switch from one to the other takes 5-10 seconds and is fool-proof and could mean an extra couple of flight in a long day. More importantly it could mean a regatta programme is completed where otherwise it might struggle for time.

I don’t know if Ironrock Sailing Club thought the idea up themselves or saw it elsewhere, I think it is brilliant, for its simple and elegant solution to the hassle of tying flags onto the transom and wrapping them properly after each race if for nothing else. – SS.

let it be known