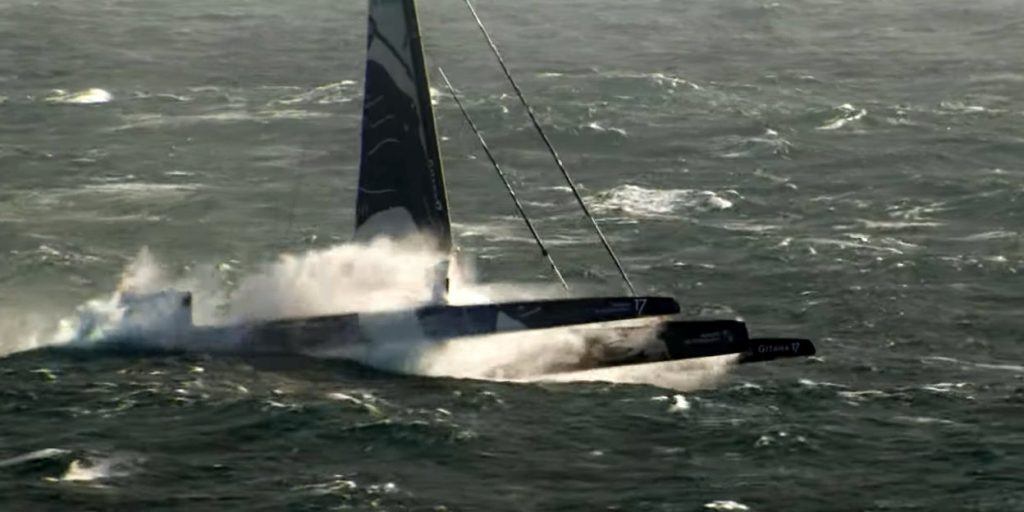 As evidenced by the very nicely done videos of the start that are currently on the front page, the long awaited Brest Atlantiques race has finally begun. A few days late mind you, to allow the passage of Storm Amelie, the race started in fresh to frightening conditions. With the big Ultim 32/23 class maxi trimarans looking at a blistering crossing of the Bay of Biscay, François Gabart’s MACIF has jumped out to an early, and fairly unsurprising, lead, though Maxi Edmond de Rothschild is slowly reeling MACIF back in.

A race that many thought would never happen – a handful of large multihulls fully foiling offshore – is now underway, and we are all about to be witnesses. The longest doublehanded race ever staged for multihulls, no matter what happens, history will be made. As well as the boats themselves, perhaps the aspect that makes the inaugural Brest Atlantiques race so extraordinary is the incredible media coverage that should come from it. Unlike other shorthanded races, the race has incorporated a media man onto each trimaran, just like in the fully crewed ‘Ocean Race’.

In this day and age of social media, smartphones in our pockets and constant content creation, the race’s organizers are again pushing the envelope of offshore yacht racing. Multi-time ‘Ocean Race’ OBR Yann Riou will be onboard Maxi Edmond de Rothschild, which is co-skippered by Volvo Ocean Race winning skippers Franck Cammas and Charles Caudrelier. Riou in particular has been on the forefront of onboard sailing media for years.

His pre-start campaign teaser is simply next level and must certainly be considered a favorite to win the upcoming Mirabaud Sailing Video Award for 2019, documenting the near destruction and hard-earned resurrection of what is the first built-from-the-ground-up fully foiling offshore multihull the world has ever seen.

Onboard the race favorite, MACIF, co-skippered by François Gabart and Gwénolé Gahinet will be media man Jérémie Eloy, a professional kite boarder, media man and award-winning drone extraordinaire. With what should be the quickest boat in the fleet – also now fully foiling since it’s recent refit – piloted by the ‘golden boy’ François Gabart and his ultra-talented 35-year old co-skipper Gahinet, Jérémie’s outside-the-box approach to video and sailing media should create some damned compelling content for us all to enjoy from the comforts of our own homes. It’s only in French, but here’s a nice campaign teaser from Jérémie.

Alongside Thomas Coville and Jean-Luc Nélias onboard the newly launched Sodebo Ultim 3 will be fellow Volvo Ocean Race OBR veteran and longtime professional media man Martin Keruzoré. With more than a decade’s experience in the game and a new and somewhat unproven boat, we’re frothing to see the content that Martin creates for the Sodebo camp, one of the main protagonists in this new and fascinating Ultim 32/23 class movement.

Finally, Yves Le Blevec and Spaniard Alex Pella will be sailing the former Sodebo Ultim, now known as Actual Leader with media man Ronan Gladu onboard. Sailing the only boat in the fleet without lifting foils, Le Blevec and Pella will have their hands full in trying to keep up with the new foilers, but then again, with a proven boat capable of getting around the world in just 49 days, rough weather and attrition could play into Actual Leader’s hands.

Ronan cut his teeth filming and photographing surfing, and is one of the leading surf filmmakers in Brittany. We look forward to seeing his funky, artistic and oftentimes retro approach to filmmaking collide with racing maxi-multihulls unleashed in the Atlantic Ocean.

As of this writing, the quartet of big tri’s are blazing across Biscay and preparing to crack off even further and begin a long sleigh ride towards Brazil, that, in the words of the skippers, should be “fantastique”. Follow along at brestatlantiques.com and don’t forget to hit up the race’s YouTube channel as the film aspect of this unique and unprecedented race should be something not to be missed.  – Ronnie Simpson.