here’s how it’s going down 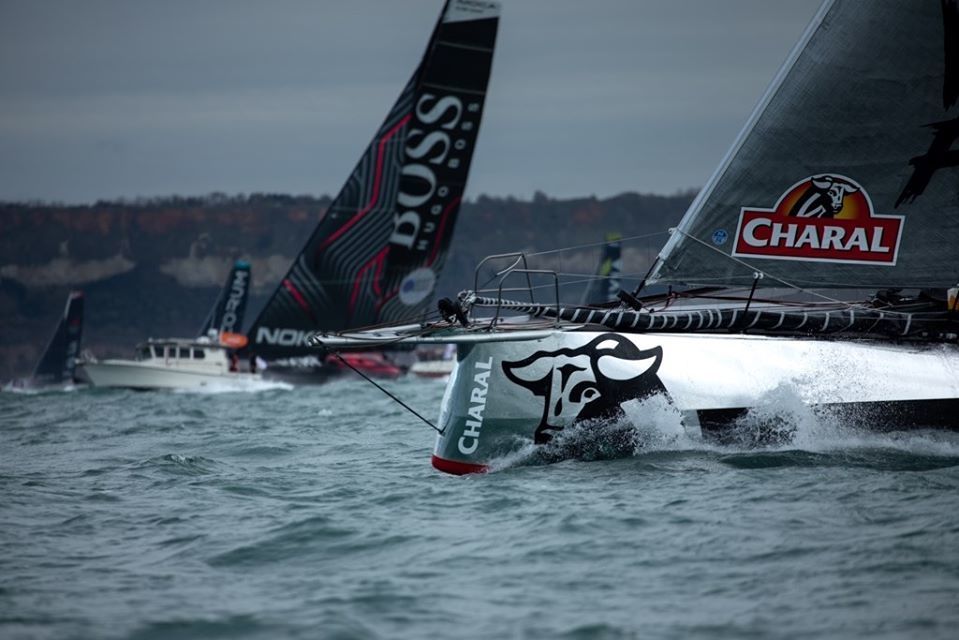 More than 24 hours into this 14th edition of the Transat Jacques Vabre – from Le Havre, France to Salvador de Bahia, Brazil – Jeremie Beyou’s revolutionary IMOCA 60 Charal continues to lead the fleet, though not by much. As of this writing, most of the IMOCA class leaders are sailing on a port tack upwind in southerlies on the leading edge of a low-pressure system.

Just one year before the next edition of the Vendée Globe, the record-setting fleet of 29 IMOCAs (up from just 13 two years ago), offers a unique and highly-anticipated chance to evaluate the progression of the offshore racing monohull in real time. After departing Le Havre in a moderate north-easterly and sailing upwind to a mark before cracking off and running west through the English Channel towards open water, the massive fleet of IMOCAs and Class 40s, plus a trio of Multi 50 trimarans, are now negotiating a low-pressure system that will eventually lead them to the tradewinds that will carry them to Brazil.

With more breeze on the way, upwind, carnage is almost guaranteed. As of this writing, at least two Class 40’s have abandoned the race, including previous fleet leaders Luke Berry and co-skipper Tanguy Le Turquais onboard Lamotte – Module Creation, who dismasted. Shortly thereafter, fellow Class 40 SOS Méditerranée, skippered by Pascal Fravalo and Guillaume Goumy, abandoned the race and diverted to Lorient; they were already out of spinnakers and had electrical issues which prevented them from accessing weather information. William Mathelin Moreaux and former IMOCA superstar Marc Guillemot onboard Class40 Beijaflore are also headed to Brittany to evaluate a shoulder injury sustained by Moreaux.

Combine this with more spinnaker damage onboard the Japanese Class 40 Kiho and a trio of IMOCAs making pit stops for various reasons, and it’s clear to see that the conditions have been ‘spicy’ as predicted by American Charlie Enright before the start.

For his part, the American ‘Ocean Race’ skipper is sailing a spectacular race onboard 11th Hour Racing with co-skipper Pascal Bidégorry. Having only recently made his IMOCA debut, the Rhode Island native and his French co-skipper have at times been the fastest boat in the fleet and are certainly in contention to achieve a top result. Their previous generation IMOCA (formerly Hugo Boss) was nearly lost at sea in this race four years ago with Alex Thomson and Guillermo Altadill; something which certainly weighs heavy on the mind of many skippers in the race.

Thomson, in particular, is sailing his debut race onboard the new Hugo Boss with a keen awareness of attempting to not break the boat. With the team’s performance manager Neal McDonald – a veteran of multiple Whitbreads, Volvos and America’s Cups- as co-skipper, he claims that winning is simply not their goal, “My money would be on Charal. We watch these boats and I’m very impressed by the way they’ve tamed the beast, because they are beasts. We’re on the bottom of the ladder and they are half way up it. You need time to tame them. There’s a fine balance between pushing it and not breaking it and all the little tweaks that mean you get to the bottom of things quickly.”