the return of the clown prince 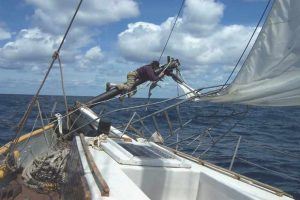 For many of us Anarchists, we can never forget the halcyon forum days of Reid Stowe.  Do a search through the forums to read some of the best posts we’ve ever had, though this is a good place to start.  Read the article, and be sure to find this statement:

As his voyage gained international coverage, he became the subject of derision in a corner of the sailing community. The users of a website called Sailing Anarchy, which caters to regatta racers and yacht owners, started mocking Mr. Stowe as a narcissistic hippie with a knack for self-promotion. Still, they followed Mr. Stowe’s trip obsessively, and one message board reached over 30,000 comments.

“I guess Stowe is still bobbing around, people continue to give him enough stuff to get by and he manages to lure in another young thing,” read a typically caustic comment. After Ms. Ahmad became pregnant, their scorn intensified. One commenter tracked down Mr. Stowe’s federal conviction for pot smuggling, and he also posted a report that Mr. Stowe once owed more than $11,000 in child support to the mother of his daughter from his first marriage. (Mr. Stowe insists he wasn’t behind on payments).

When the trip ended, the trolls faded away, but Mr. Stowe said he lost valuable sponsorship opportunities as a result. Since then, he’s also been trying to publish a memoir. Read on.

the guns of new york