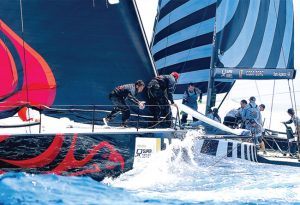 A breezy, adrenalin-pumping Cascais marked the mid-point of the 2019 52 Super Series. Day in day out the action was so close that it was often genuinely breathtaking, both in terms of the skill of the crews and also of the standard of preparation that allowed these ultra-refined boats to race within inches of each other in tough conditions without a single technical failure.

Also remarkable at this level, seven boats won at least one race, while at the end just one point separated winners Quantum Racing from runners-up Azzurra. In third and fourth Platoon and Bronenosec were tied on points, with the countback favouring the German-flagged crew. Read on.

Kings of the Road