australian sailing and the sand people 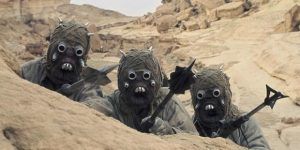 Last week the Galactic Empire returned to Tatooine to dispatch Uncle Owen. Uncle Owen was always a “goner“ after the last visit.

The outcome was never in doubt given that the Empire sent the same storm troopers who had tried to quell the last rebellion which in part involved the same issues. But this time the Empire made it even worse for itself as the now the sand people are marshalling their forces in the hills and the Empire has lost control of the desert.

Like last time no substantive reasons were given, save that the competitor was also threatened with an RRS 69 misconduct charge and exclusion under the Constitution of the Organizing Authority. This was later said to by the organising committee to be a misunderstanding about the contents of the correspondence which was actually referring to the conduct of the crew member.

In any event the crew member did not compete.

The competitor sought redress on the grounds the prohibition was improper and there were no reasons accordance with the RRS. The prejudice alleged was that the very experienced and expert navigator if he had raced would have necessarily resulted in a reduced elapsed time.

The protest hearing was it seems at least from the relevant documents a heated affair with it at least been adjourned once when considering conflict of interest and bias of members of the committee arising from the hearing of an protest some months earlier concerning a fun race collision between a port tack race boat and a starboard tack multihull which was topical on the forums on this site at the time.

With the conflict issues resolved, there was then a controversy as to whether where the physical race office is locked for the night is a race official standing in a bar area in the early hours of the morning is an “open race office” for the purpose of the computation of protest time limits?

Much seemed to turn on the fact that a competitor could call a race officer on a mobile phone when the race office was closed.

In any event, the protest was found to be lodged out of time and there was no hearing of the substantive dispute.

There was an appeal and that appeal was dismissed, but not before showing up significant shortcomings in the Australian Sailing appeal process.

That is to say, firstly it appears that at no time was the Appellant ever given the material submitted by the organising authority or protest committee to the appeal panel and was never given the opportunity to respond in anyway, so the Appellant never knew what is put against his case even after the decision was handed down.

Secondly, in a circumstance where the conduct of the hearing below was in issue, it appears that the appeal panel decided an issue of credit without hearing from any witness, yet must have necessarily accepted one version over another or otherwise never considered the issue at all.

Thirdly, the Appeal Panel found that RRS 70.1 protected the findings below which necessarily involved a finding that there was a properly conducted hearing below notwithstanding that there were no witnesses before the Appeal Panel to allow such a controversy to be decided or alternatively found that RRS 70.1 protects all facts found from review regardless of the conduct of the hearing below.

Fourthly, given the matters before the appeal panel, which included conflict of interest, denial of procedural fairness and time limits, the appeal panel took just 32 lines in their analysis of the appeal to dismiss it.

Now the real problem for Australian Sailing is that all of the aforementioned are indicia of a party not been accorded procedural fairness at law.

No doubt, Australian Sailing will say that the appeal was concluded in terms of the RRS and in a manner consistent with their own policies.

However, the RRS do not exist in a bubble, quarantined from the rest of the country or indeed it’s laws.

It must be accepted that rules of a domestic tribunal such as an appeal panel under the RRS can and will limit the rights of a person appearing before that domestic tribunal and may in some cases restrict the procedural fairness to be accorded.

However, it is also uncontroversial that even in domestic tribunals in Australia at least, whether as a matter of public policy or implied contract, that the hearing must be conducted with good faith and honesty as those terms are understood in the context of administrative decision making.

Having reviewed the Decision of the appeal panel, it is controversial whether the requirements of the RRS and the procedures adopted by Sailing Australia meet the aforementioned general principles.

To be clear, if there is problem, then Australian Sailing should move to fix it before a civil court thrusts a solution on the parties that nobody wants or will like.

It would an odd result that a competitor may be accorded procedural fairness in a protest hearing but not in an appeal.

Equally, it would also be odd that the outcome be determined by whether a competitor was a Corinthian or professional because of the detriment to that person’s livelihood or trade caused by an adverse decision.

To complicate matters further, the obligation to accord procedural fairness is different across jurisdictions with Australia different to Great Britain and perhaps Singapore, so one size will not fit all.

So why does procedural fairness matter?

Australian Sailing still has to confront the problem that a person has in practical terms been excluded from participation on the sport it supposedly administers without a hearing.

Further, now another person who wishes go sailing with such a person now faces sanction without a hearing or even been afforded the opportunity to be heard.

And remember, the sand people always ride single file to hide their numbers!