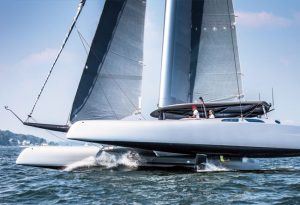 Tommy Gonzalez and his team at Fast Forward Composites have gone slowly and carefully with their Eagle Class 53 project, recognising that previous attempts by others to leap towards the promise of foiling large multihulls have had unsuccessful and even dangerous outcomes. As he says, it took years of efforts at the America’s Cup to apply the focus on research, design and testing to start to get it right at that level, and without those resources then understanding the nuances of control in this design space dictates a more measured and methodical approach strategy to understand foiled flight to get it right.

So it’s exciting to see that after a winter of testing and refinement in the Caribbean and now a summer of testing close to the shop in Bristol, the Eagle Class 53 has made great progress in its quest to be ready for harnessed and controlled flight. Gonzalez and his team have been using a Stilleto 23 cat as a scale model to test ideas before trying them on the Eagle Class 53, and can report progress in the following areas:

“Waaa, I can’t get crew for my SuperYacht”