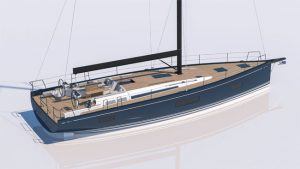 The First Yacht 53 has a lot to live up to. There’s the heritage of the First marque, which represents more than 40 years of offshore racing and cruising. There’s the exceptional pedigree of a design team that combines 25 years at the forefront of America’s Cup innovation with the groundbreaking flair of Brenta and Wally.

And there’s also the fact that nearly a decade has passed since the launch of the last offshore yacht to bear the famous brand name, the Juan K-designed First 30. It’s fair to say that this is a long anticipated and eagerly awaited boat. Indeed, five First Yacht 53’s had already been sold off plan before Beneteau began building the prototype. Read on.