risen from the dead 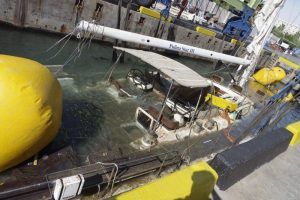 In July 2015, the 1 year old, £5.5m Oyster 825 Polina Star sank suddenly in the Mediterranean. It was unprecedented of a yacht like this to suffer such structural failure and she spent 12 weeks on the sea bed before being lifted while the cause of the sinking was investigated. The story was well documented in the world media (one example here). At the time it was declared a total write off by the insurers.

However, 4 brothers from Essex had a vision. They bought the salvaged hull and after a very busy year, working 7 days a week with a team of shipwrights and engineers (which at times numbered over 25 working at any one time), the boat is almost ready to hit the water once again.

I have been involved in the project since April, after returning from my attempt at a solo non-stop around the world record (I had rigging issues after 75 days alone at sea and 14,500 NM and had to abandon the attempt).

I will be skippering the boat, now renamed ‘Champagne Hippy’ in the ARC race from Gran Canaria to St Lucia next month.

An amazing story of bringing this incredible boat back to life. The boat has literally been rebuilt from the keel up in 12 months. For more information on the project or for an invite to the launch, please get in touch.