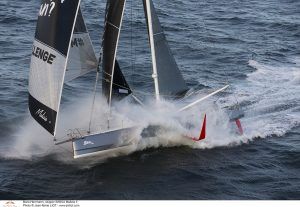 It’s incredible how far the sport of sailing has come in the last few decades. Just think about it. Right now 89 sailors await a weather window in France before setting off to race single-handed across the Atlantic in some pretty futuristic 21-foot boats. The Mini Transat is an incredible event with a class that has grown from strength to strength and is not only on the cutting edge of design and technology, but has also been a place where some of the best offshore sailors in the world cut their teeth.

Meanwhile to the south the 11 boats in the Clipper Around the World Race are emerging from the doldrums on the second leg of their circumnavigation. This is the twelfth running of this event which is being competed in identical 70-foot yachts. Around 700 crew will take part, both male and female, with the youngest at 18 and the oldest at 76. For those sailors who want to go the whole way around the world they will have to fork over around $55,000.  Not chump change but also not a fortune for an adventure of a lifetime.

In Newport, Rhode Island the US contenders for the America’s Cup are out boat testing their a brand new 75-foot flying monohull. American Magic/Defiant has shown the world what the future of sailing may look like with the boat being out of the water for an entire race.

Same thing is happening down under in New Zealand where the defenders of the America’s Cup are also putting their new AC 75 through its paces. Sure we know that the America’s Cup has always led the field in new ideas and technology but these boats are something else and it’s going to get even more interesting when other teams launch their yachts.

Last week SailGP wrapped up their global tour in France with a nail biter final race for the winners purse of a million dollars going to Australia. The series started in Sydney and went on to San Francisco, New York, Cowes on the Isle of Wight, and finally Marseille. The catamarans were consistently sailing at speeds in excess of 50 knots with closing speeds getting close to 100 miles an hour. Such close racing on tight inshore courses. Just amazing and the second series will start next February back in Sydney,

Perhaps the biggest event of this year will be the Transat Jacques Vabre, a double-handed race from Le Havre, France to Salvador in Brazil which starts on October 27.  There are 67 teams taking part with no fewer than eight brand new absolute cutting edge foiling IMOCA 60’s participating. This is the 14th running of Transat Jacques Vabre which regularly attracts the best offshore sailors in the world. There are three classes; the IMOCA 60, Class 40’s and a 50-foot multihull class.

The race will attract over a million spectators to Le Havre during the two weeks leading up to the start and will bring a huge economic boom to that region of France which otherwise would be tourist free as the long winter approaches.

Let’s not forget that at least two Ultime multihulls are preparing to go after some pretty difficult sailing records. Spindrift Racing are on stand-by waiting for a weather window to try and break the Jules Verne record, the fully-crewed, non-stop circumnavigation record. The time to beat is 40 days 23 hours 30 minutes and 30 seconds and was set by Francis Joyon on his Ultime trimaran IDEC.

Meanwhile not far away Thomas Coville is getting ready to go after the single-handed, non-stop circumnavigation record now held by fellow French sailor Francoise Gabart. Incredibly Gabart’s record time of 42 days, 16 hours, 40 minutes and 35 seconds is only two days short of the fully-crewed record time. How much faster can these boats go and how much more intensely can they be sailed? I guess we will find out.

These are just a few things going on in sailing these days. This past summer in the Norther hemisphere hundreds of regattas took place and the same is about to happen as the Southern Hemisphere come out of its winter slump.

There are new around-the-world races being planned, two for Class 40’s and our old friend Don McIntyre is organizing the second running of the Golden Globe race as well as the Ocean Globe Race which is a copy of the first Whitbread Round the World race that took place in 1973. McIntyre reports huge interest in both races from all around the world. Sailing is really flourishing and I, for one, am very happy to be a part of it.

Title inspiration thanks to Daft Punk.

cloudy with a chance of mother’s day